What if we did have superheros? What if they had been there to help us (or turn on us) when the world most needed superheroes to stamp out the villains of the real world? What may have been just a fleeting thought for us has become an artistic fantasy for Indonesian illustrator Agan Harahap. Merging some of Marvel’s most famous fictional figures with real archive photographs from the 20th century, Harahap momentarily re-writes history. Spiderman ready for action with American soldiers during street combat on the Avenue de Paris in Cherbourg-Normandy, France, 1944.

Agan, who has displayed his work at several exhibitions across Southeast Asia, takes between one to three hours to create the images using Photoshop. He assures that there’s no political motivation behind his work thinks that if the heroes really attended the events they would probably just pose for a photo and take off! All thanks to Superman! US Army soldiers carry priceless artworks down the steps of Meunschwanstein Castle where hoards of European art treasures, stolen by the Nazis, were hidden during World War II. Neuschwanstein Castle, 1945.

The Hulk surveys the damage in Afghanistan, 1986 as Afghan resistance fighters returning to a village destroyed by Soviet forces. Batman keeps a watchful eye over Fidel Castro at the MATS Terminal Washington 1959. Batman talks with US paratroopers in Greenham Airfield,England, June 5, 1944. The paratroopers are about to board their airplanes to participate in the first assault in the invasion of the continent of Europe. V from V for Vendetta with surrendering German soldiers of the Wehrmacht. Photo taken in the sector of  Taret de Ravenoville, June 1944. Who’s side are you on? Heinrich Himmler inspects a prisoner-of-war in a POW quarry (not a concentration camp) near Minsk, 1941. The prisoner in the photo is British serviceman Horace Greasley. Greasely gained fame for escaping his camp over 200 times, and returning back into captivity each time. His repeated escapes were due to a secret love affair with an interpreter named Rosa Rauchbach, the quarry owner’s daughter. Perhaps illustrator Harahap felt Greasley was a hero in his own right and didn’t need Captain America to stand up for him. The Flash supervising the captivity of German soldiers, 25 April 1945.

Check out the rest of Agan Harahap’s work on Flickr. 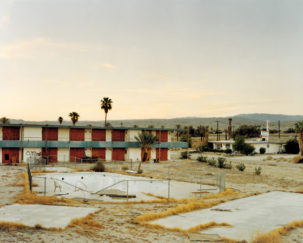 The Apocalypse came early for the Salton Riviera