Paris may be the City of Light, but it is filled with dark corners. Some of the best-known ghost stories were inspired by the very real, gory history of this otherwise romantic setting. Behind – and, indeed, beneath – the picturesque Haussmanian facades lurk countless tragic tales, the protagonists of which are still said to stalk the streets… after all, a city filled with history is a city filled with ghosts.

It may be one of the most iconic landmarks in the world, but even the Eiffel Tower has a few skeletons in its closet. After courting for a period of time in the 1920s, a young couple agreed to meet at the top of the tower – but only one of them would ever leave. The two had arrived with very different intentions: he was there to propose, she was there to break up with him. But it was he who spoke first. Down on one knee, he popped the question and was promptly rejected. The story goes that he pushed her off the ledge, enraged by her response. An alternative is that she backed away in disgust and fell to her death. Whichever version of events you choose to believe, they end the same grisly way. To this day, tourists claim to hear a nervous giggle followed by an angry voice, ending with a blood-curdling scream, always in the exact same spot.

Rue Chanoinesse is a charming little street on the picturesque Île de la Cîté. It was here, at number 20, that the original Sweeny Todd set up shop. For years in the 14th century, a barber offered special prices to foreign students. Just as in the musical, the barber killed his victims with a razor and dropped their bodies into a kitchen below, where they were butchered and sold in pies. At the time, the Seine’s Ile de la Cité was renowned for its delectable pâtés and meat pies. People came from far and wide for the succulent French delicacies – especially for those made by a butcher next door to a barber shop on the corner. The pies and pâtés sold there were so tasty, due to a certain je ne sais quoi, that even King Charles VI was said to have been a fan.

One version of the story goes that it was the ceaseless barking of the dog of a traveller, pining for his owner, that alerted the authorities to the unsavoury food preparation going on behind closed doors. Today, justice has been served: the site has since been turned into a police station. A piece of the original stone foundation of the old building has been kept in tact inside the garage.

Sweeny Todd is not the only musical inspired by Paris’ twisted past. Venture down below the Opera Garnier and you’ll discover an un-drainable lake with a stranger-than-fiction story… Nowadays, the underground alcove is used recreationally by the opera staff’s pet fish – and the French fire department, of course. But there is evidence to suggest that during the construction of the music hall, an architect named Erik requested to live in the hollows below. Sound familiar? The Phantom of the Opera, written by Gaston Leroux and published in instalments in Le Gaulois newspaper in 1909, begins: “The Phantom of the Opera did exist”.

If your set of interests meet at the peculiar cross-section of celebrity-spotting and ghost hunting, there are few places better to visit than the city’s world-famous cemeteries, filled with world-famous people. Especially if you opt to take a tour with Jacques Sirgent – Paris’ premiere vampirologist, who not only runs the (self-proclaimed) world’s only vampire museum, but gives two-hour tours for up to 30 people of the “esoteric aspects” of Père Lachaise Cemetery.

Here, the names of those buried have survived the ages – and there are reports that their spirits live on, too. It has been said that the ghost of Marcel Proust and his partner, Maurice Ravel, regularly roam the rows of headstones, searching for one another to no avail. There are those who have felt a foreboding hand on them when they get too close to the grave of 19th-century prime minister Adolphe Thiers. The spectres of Chopin and Jim Morrison also claim to be frequently spotted.

But graveyards aren’t the only haunt of ghosts. Unsurprisingly, the Paris catacombs – the subterranean labyrinth lined with human bones – have their own macabre mascot. In 1793, Philibert Aspairt, a doorkeeper of a military hospital in central Paris, snuck down to the catacombs via a staircase in the courtyard. His motive for going there in the first place is unclear, but several theories have been put forward. In the video game Assasin’s Creed Unity, Philibert went to syphon off a glass of chartreuse liqueur being stashed beneath a convent, and was caught and killed by a nun.

Whatever led to his doom, his body was found 11 years later, identifiable only by the hospital keys attached to his belt. It is thought that he became disorientated after his candle was blown out. Ever since, his disembodied voice has whispered in the ears of passing visitors before blowing out their candles. Philibert’s tombstone can now be found in the catacombs at the spot his body was discovered beneath Rue Henri Barbusse. Visiting the site is a rite of passage for any cataphile in training.

Even with a functioning lamp, the catacombs are a daunting place. As recently as 2017, two teenagers were lost in the 250km of winding underground passages for three full days. Luckily for them, they were unharmed. But Philibert’s headstone, serves as a grave reminder of the merciless nature of the medieval maze. Learn more about entering the catacombs here.

On the Rive Droite, beware the Little Red Man when visiting the Tuileries; the apparition of Jean the Skinner dressed in blood-red clothing is said to signify your imminent demise. In life, Jean had been the personal hit man of Queen Catherine de Medici during her reign in the 16th century. As time went by, with Jean successfully disposing of her enemies, the queen began to fear that he knew too many of her secrets. She decided to have her hit man hit. The legend goes that he was killed in the gardens of the former Tuileries palace and that when guards returned to bury his body, it was gone. Generations of royals and emperors are said to have seen the Little Red Man shortly before their own bloody ends. Marie-Antoinette is believed to have seen him in the corridor on 9th August 1792 – the day before revolting Parisians stormed the palace and chopped off her head. It is also widely documented that Napoleon Bonaparte began to consult the spirit prior to making military plans, which clearly worked out for at least a couple of years.

There seems to be a concentration of paranormal activity in the medieval centre of the city. None so devastating as the Rue des Chantres on Île de la Cîté, referred to as the most haunted street in Paris. This is the site of Hotel Dieu. It is one of the oldest hospitals in the world, but it wasn’t until the 1900s that ghosts began to appear in its story. The Seine is known to burst its banks, but on this occasion it had horrific consequences: a group of children suffering from tuberculosis were being kept in quarantine at the hospital and, as the water rose, they were unable to escape from the locked room. To this day, their shadowy spirits have remained on the island, occasionally heard laughing, occasionally heard screaming.

If you’re looking for an address with guaranteed fear factor, try the Manoir de Paris. Open throughout the year (but especially popular around 31st October for some reason…) this walk-through haunted house is set in an old 19th century ceramicist workshop, built at the edge of the former leper colony adjacent to what was once an infamous prison. Here your resolve will be tested by immersive events inspired by many of the stories you’ve read here.

For the most dedicated ghost hunters, sightings have been reported at hotels throughout the city. You can stay in the room of the once fleabag hotel where Oscar Wilde lived and died, now transformed into a very luxurious 5 star boutique hotel and if you take room 5077 of the Westin Vendome, it is possible that you’ll be sharing it with a 19th-century gentleman. But don’t worry about him hogging the covers – he prefers to hover by the ceiling. 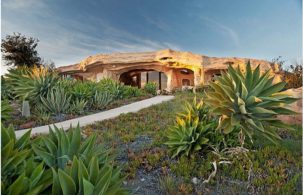 The Flintstones House is up for Sale!