13 Things I Found on the Internet Today (Vol. XI)

1. Possibly the Coolest Swimming Pool in the World

Once a quarry in the Berkshires of Massachusetts, the deeper part of the pool’s stairs, which once served as an access road for vehicles to enter and exit the quarry, were overlaid with gunite to create an easy entrance to the pool and to close off the fourth wall of the structure. Aqua Pool & Patio then finished the fourth wall with limestone to match the interior finish of the quarry. The final touch was a 25-foot waterfall in the deep end.

Here is a guy who somehow manages to make living collecting nothing but Beatles albums. But not just any Beatles album, artist Rutherford Chang only collects first pressings of the Beatles’ 1968 self-titled album, commonly known as The White Album.

Chang currently has 699 copies, all organised by serial number in vinyl bins, just like a real record store (except they’re not selling anything). The ‘art installation’, titled simply, “We Buy White Albums,” is currently at the Recess gallery in New York City.

Fahrenheit 451 is a dystopian novel by Ray Bradbury. The novel presents a future American society where books are outlawed and firemen burn any house that contains them. The book’s spine is screen-printed with with a matchbox striking paper surface, so the book itself can be burned. Designed by Elizabeth Perez

5. Elizabeth Taylor as a Blonde

6. Inside out Reese’s Peanut Butter Cups

For those who understand that the peanut butter part is way better than the chocolate, find the recipe here at Milk & Cereal

7. The ‘Viura Hotel’ in Villabuena de Alava in Northern Spain

Awesomeness via The Fancy.

12. Soviet Russia’s ‘The Ekranoplan’: Half Airplane, Half Hovercraft 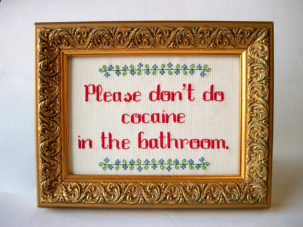