Well call me Penelope Pitstop! Okay don’t, but I bet you would if I picked you up in the sassiest car that ever was, the 1956 Dodge LaFemme. Between 1955 and 1956, Dodge produced the first car specifically marketed to women, which came in pink exterior, naturally, complete with a pink umbrella, a pink handbag and lipstick holder, among other totally sassy accessories. 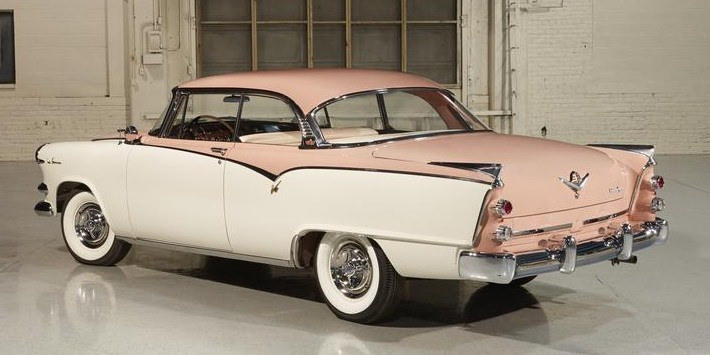 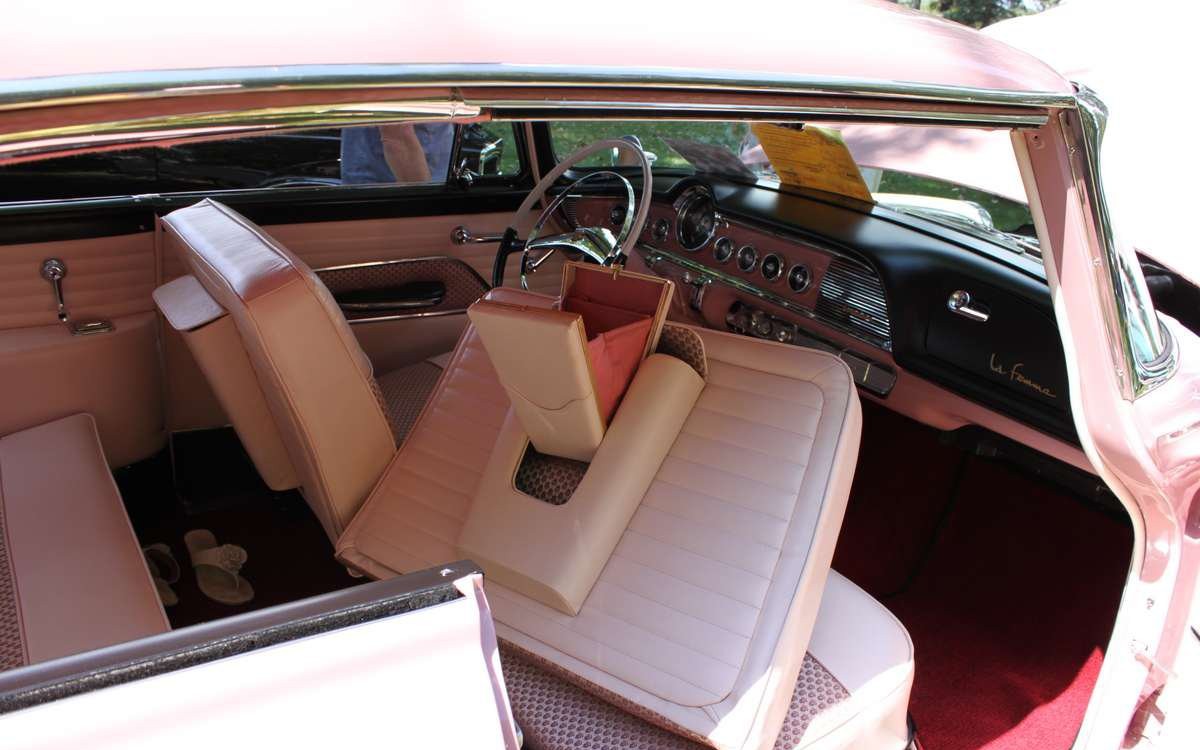 Upholstered in a pink rosebud tapestry with pale pink vinyl trim, the La Femme came with a keystone-shaped purse that could be stowed in a compartment in the back of the passenger seat. 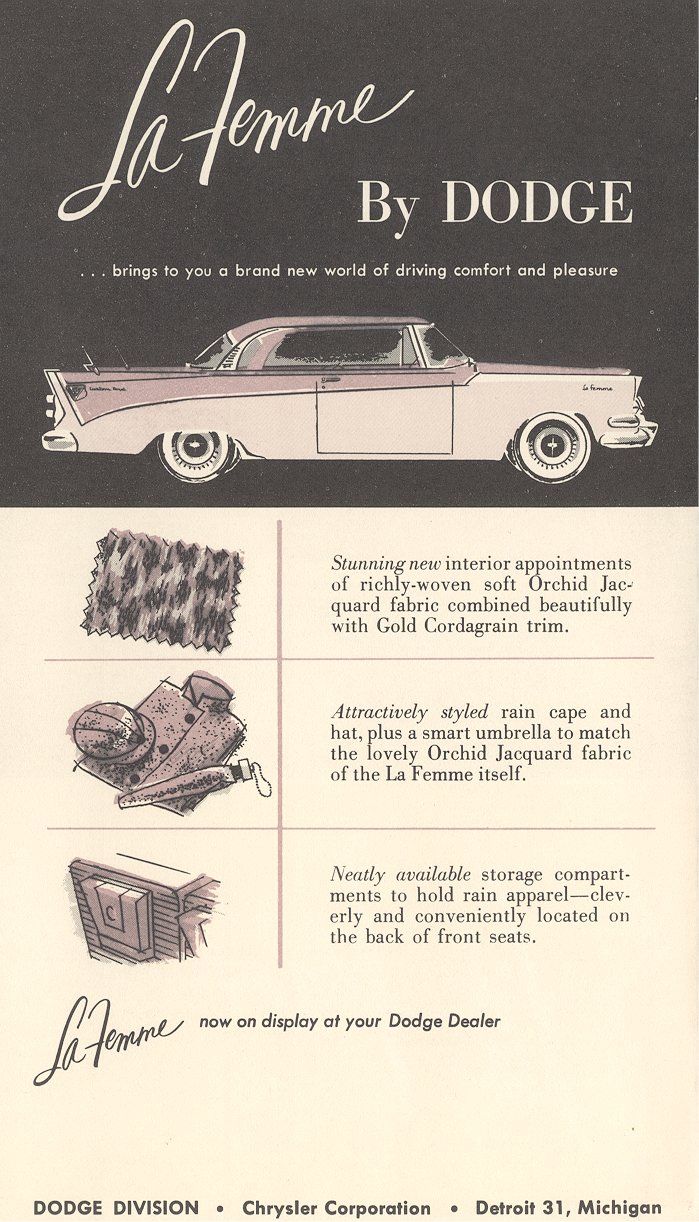 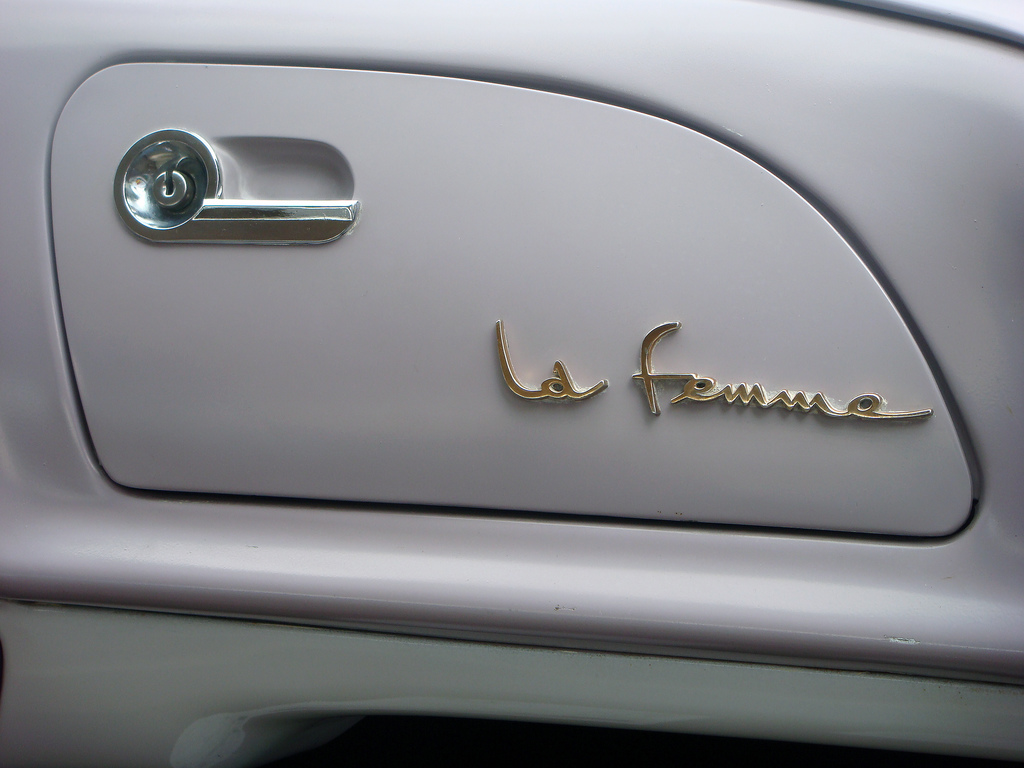 Each purse was stocked with a face-powder compact, lipstick case, cigarette case, comb, cigarette lighter and change purse, all made of faux-tortoiseshell plastic or pink calfskin and gold-tone metal, all were designed by “Evans”, a maker of women’s fine garments and accessories in Chicago at the time. 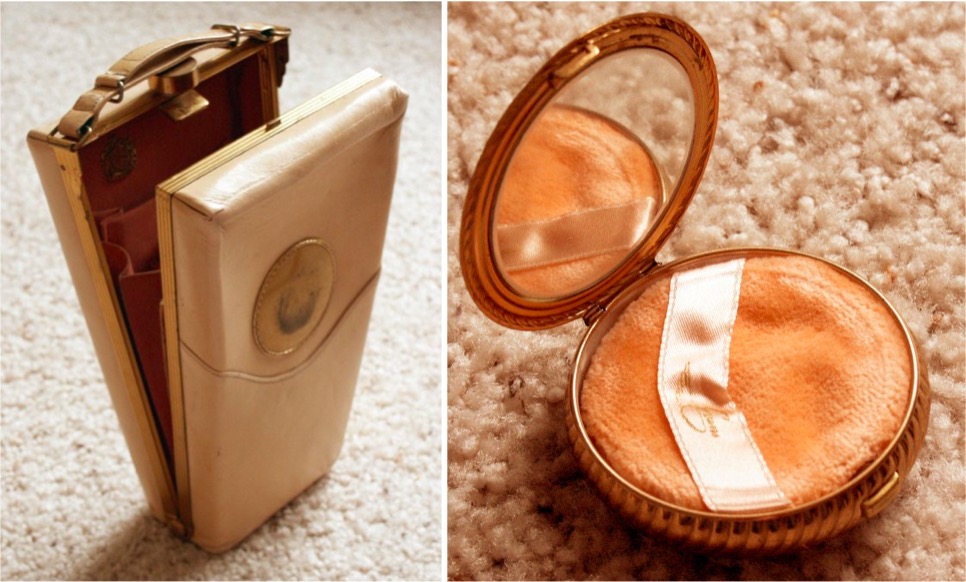 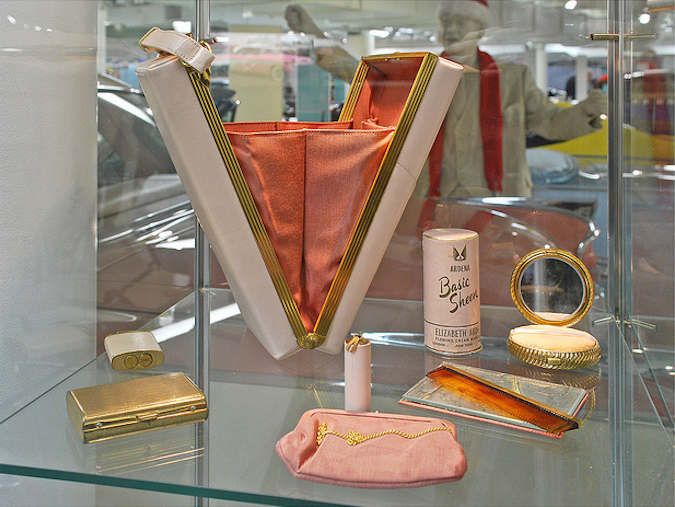 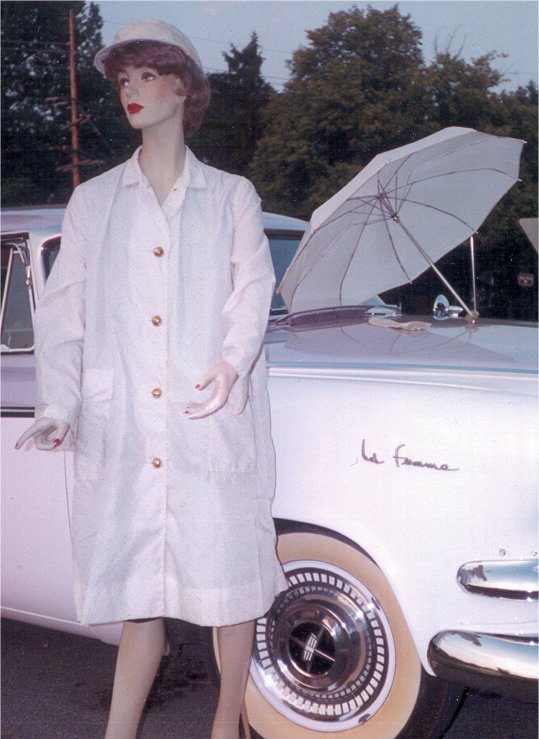 Behind the drivers seat was a compartment that contained a raincoat, rain bonnet and umbrella that matched the rosebud interior fabric. 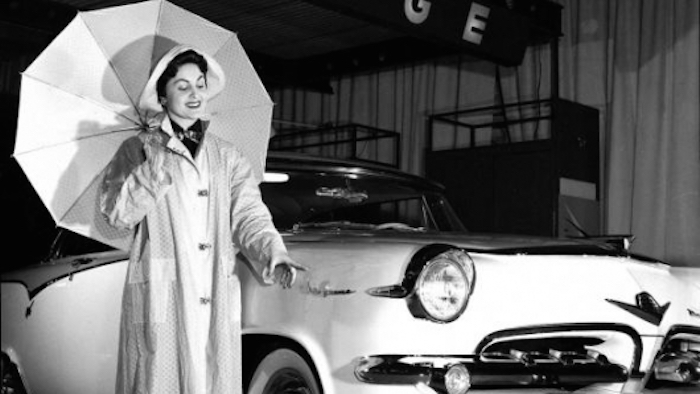 The full-sized automobile based on a 1955 Dodge Custom Royal Lancer, came as an optional package for $143 extra, at a time when American women had become a vital part of the American workforce. After WWII, women no longer only had a place as housewives or secretaries, but also as managers, lawyers, doctors, scientists and small-business owners. 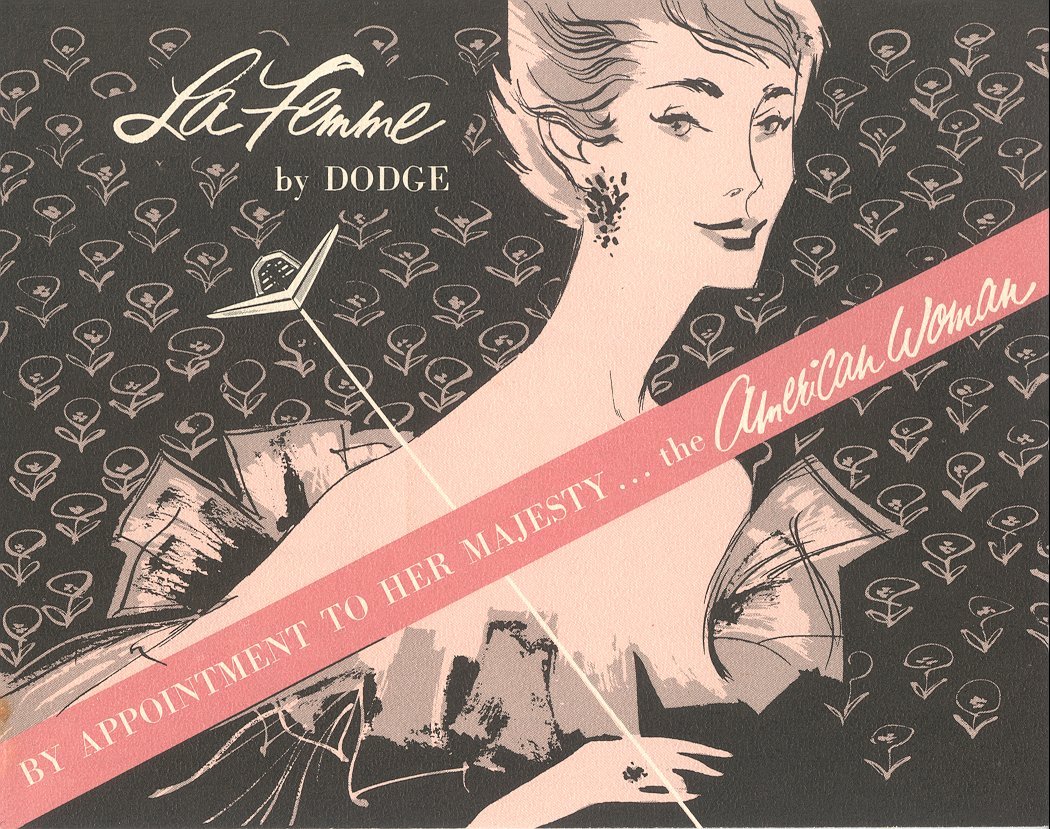 Continuing business on the home front fell on their shoulders and with a need to now get further than the corner grocery store, a new sense of female independence emerged on the open road. Dodge wanted to provide that– with a stylish touch of pink.

Their marketing brochures said the car was made “By Special Appointment to Her Majesty… the American Woman.” 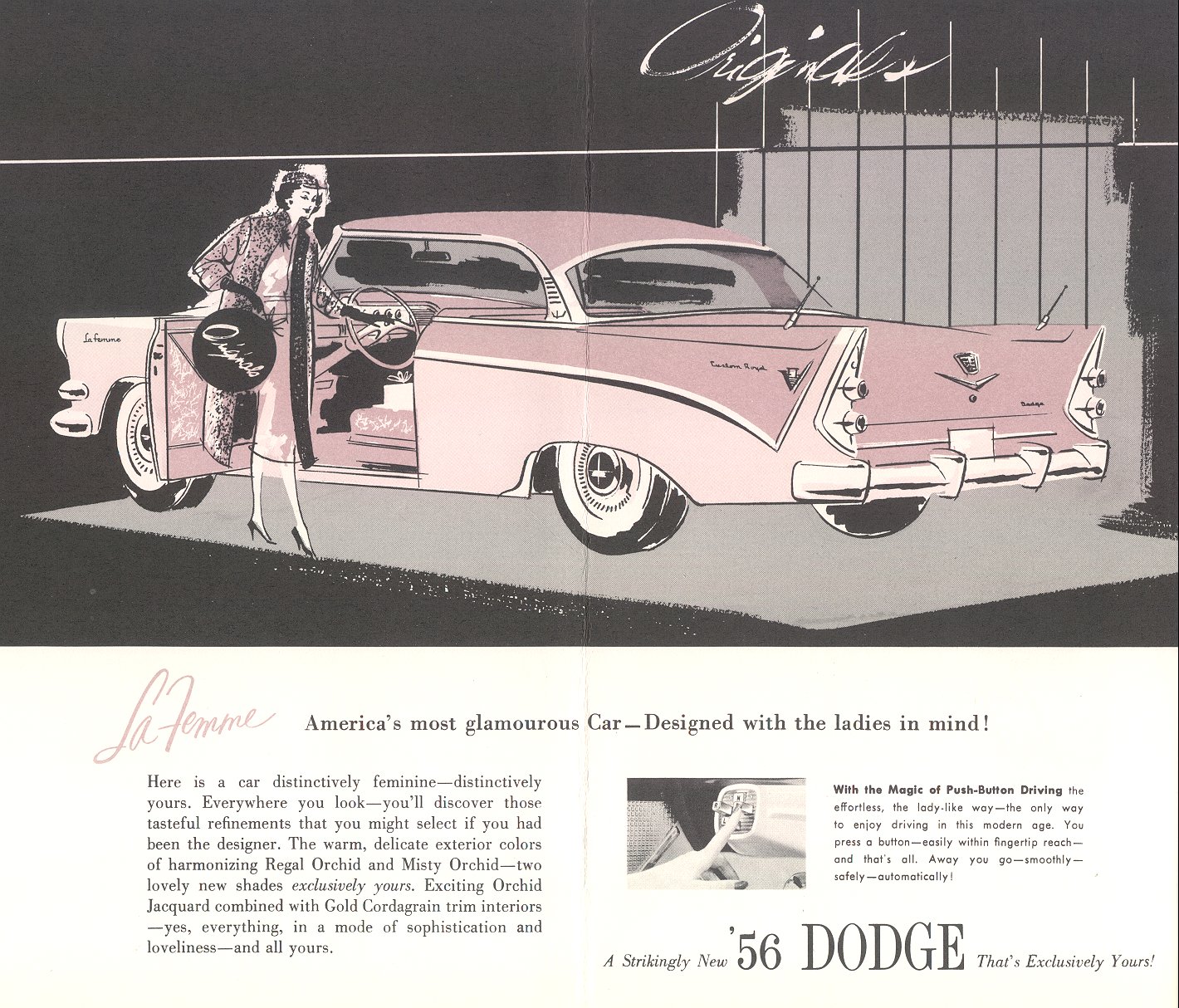 The 1956 model introduced push-button driving, a futuristic “Mrs. Jetson” transmission control at the touch of a button mounted to the left of the steering wheel. Dodge advertised them as “The Magic Touch of Tomorrow.” 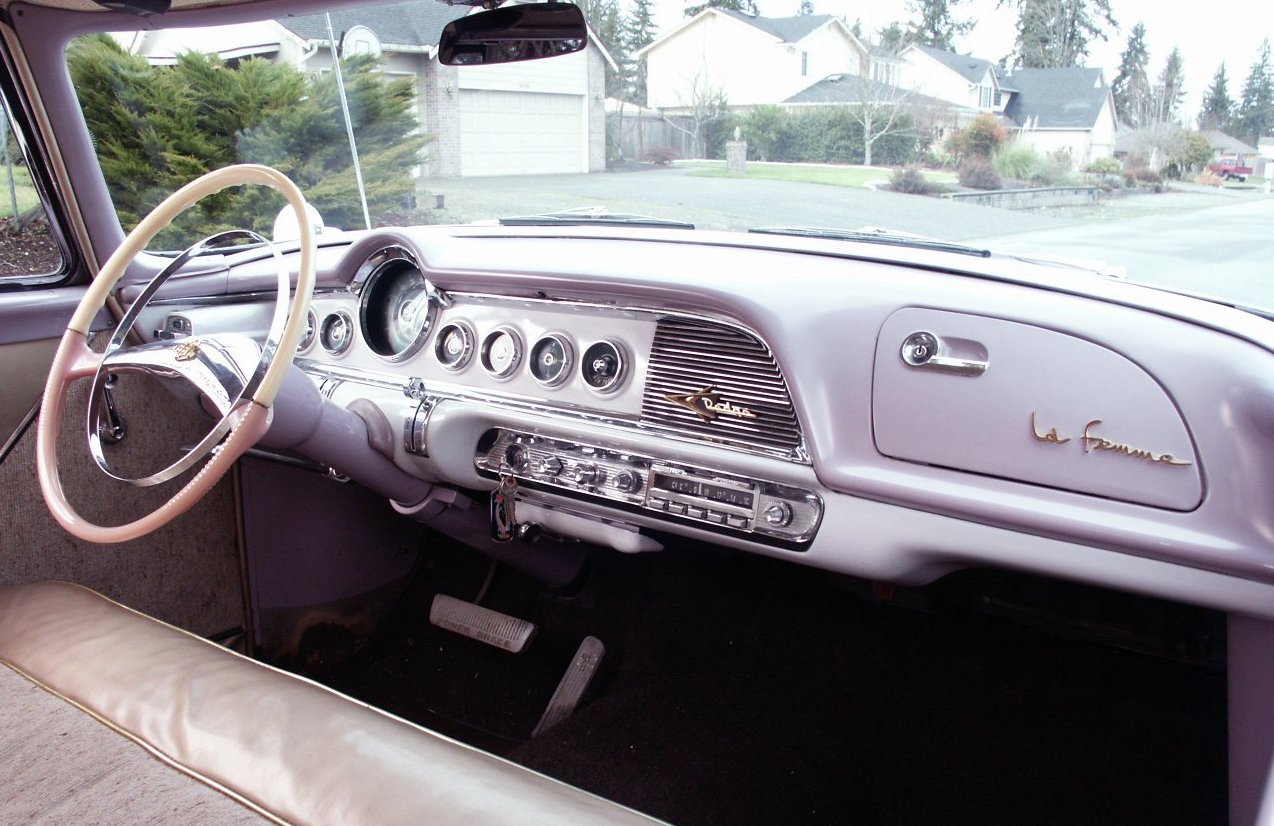 Unfortunately, La Femme has been more or less forgotten in automobile history, after Dodge discontinued it the very next year the second version was launched in 1956. Because it was considered an optional package to a standard model, its exact production numbers are not known, but guesses are around 2,500 were made over a two-year period. 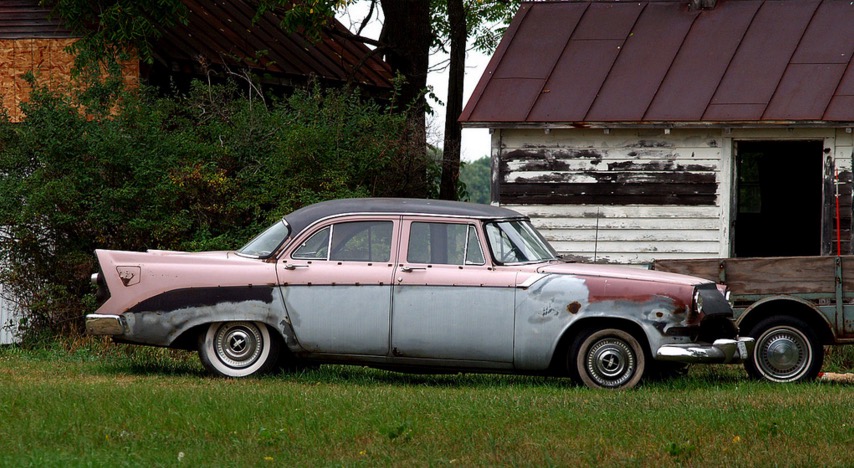 Around less than 60 Dodge La Femme’s are known to survive today. 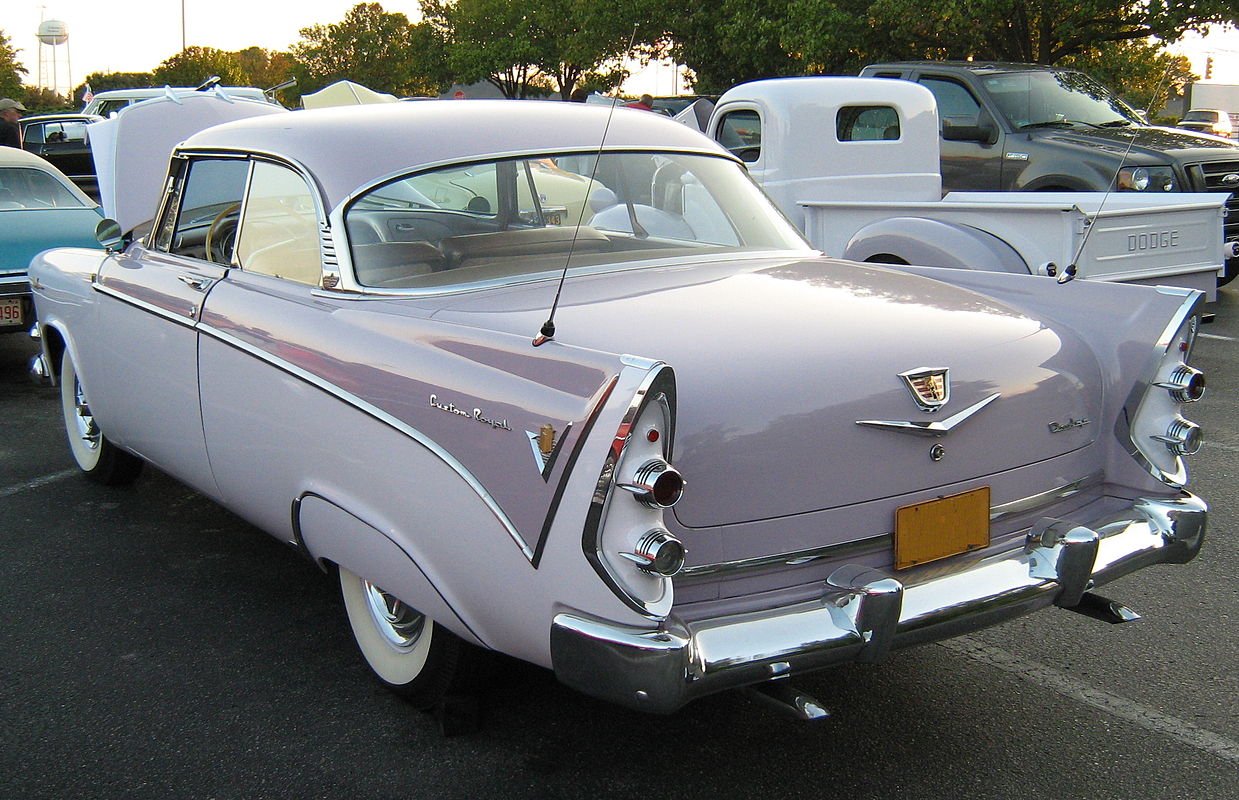 The bottom line is, the La Femme didn’t sell. Some say it wasn’t marketed well enough at the Dodge dealerships, where only single-sheet pamphlets were available instead of shiny demonstration models. There is also very little evidence of magazine, television, radio advertisements and it’s likely most American households never even knew it existed at the time. 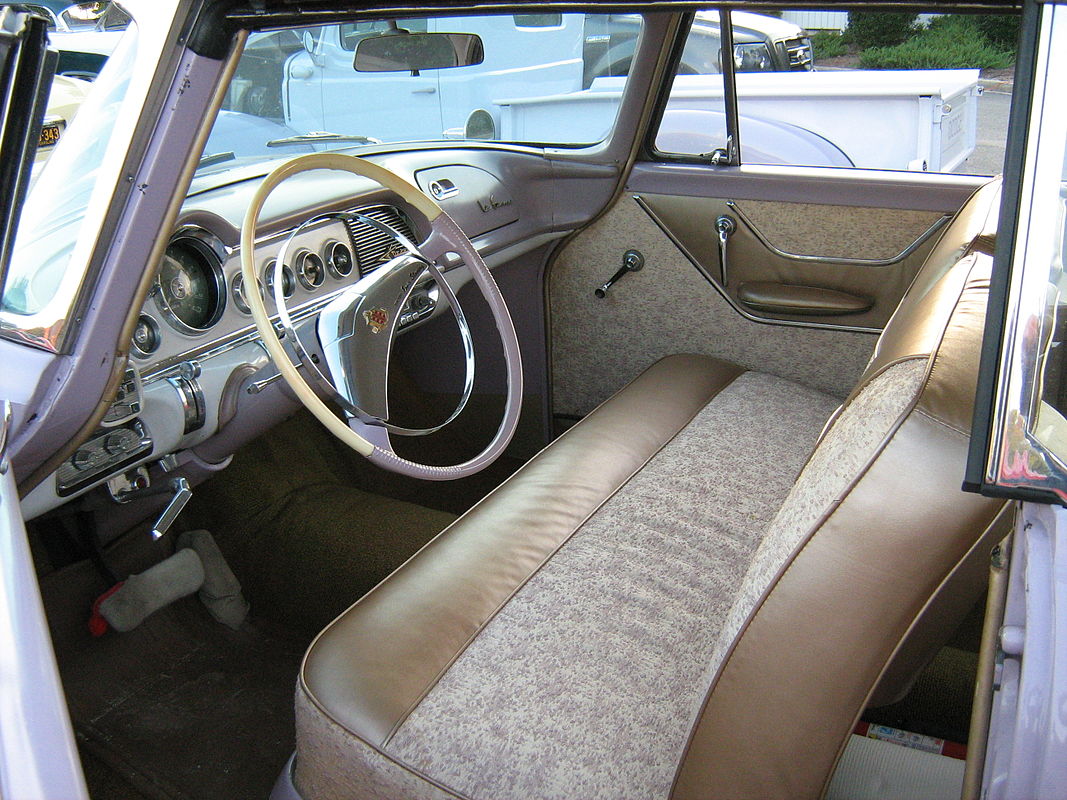 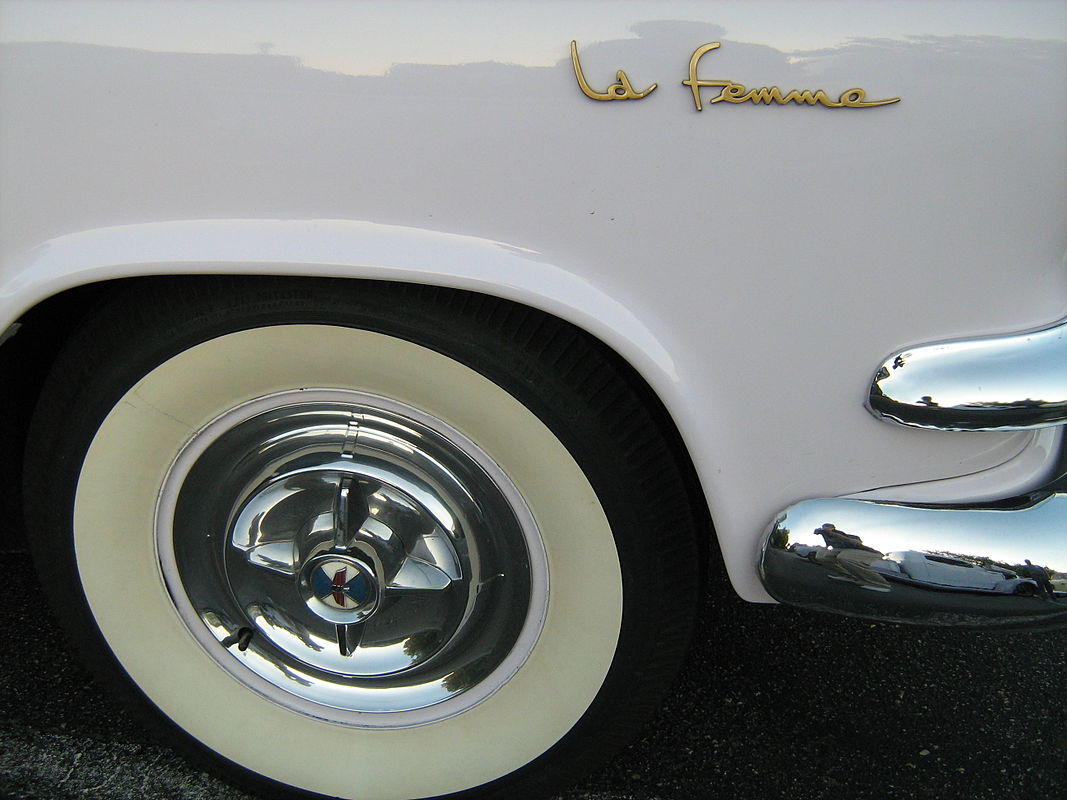 Or perhaps, America just wasn’t ready for an army of Penelope Pitstops to take over the roads? 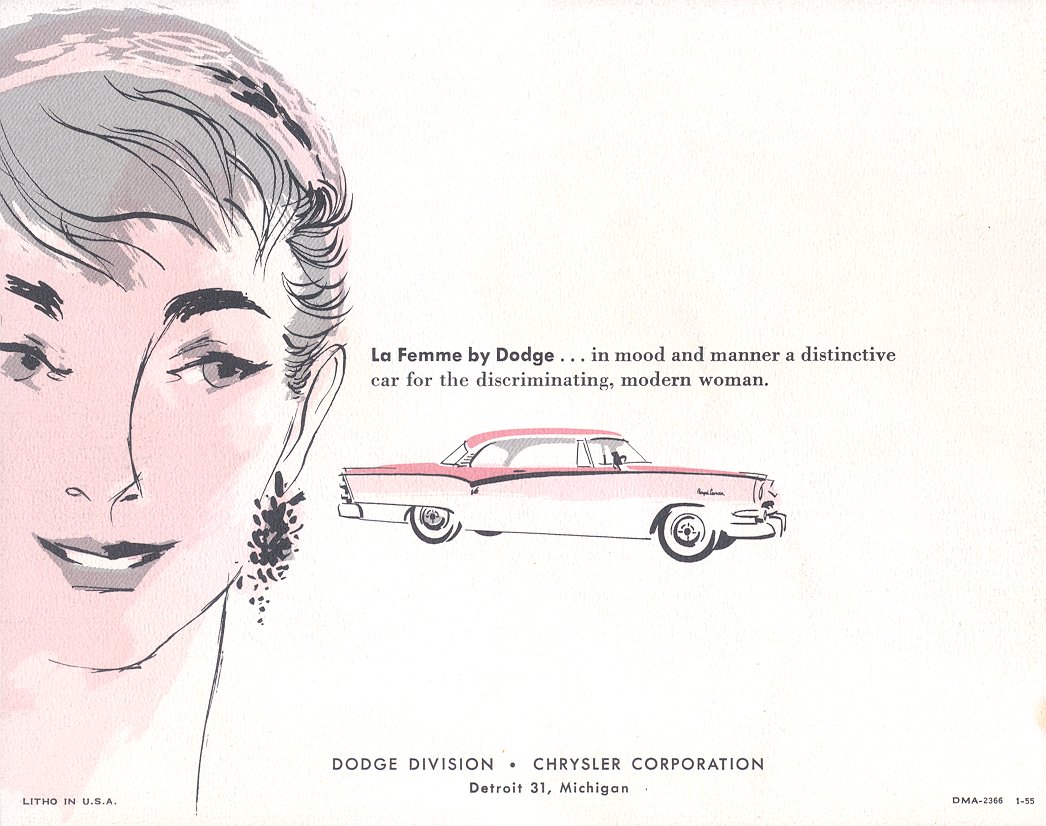 And on a parting note… 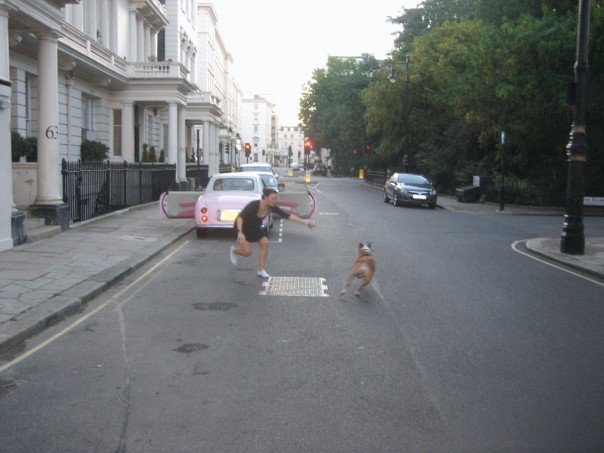 I’ll just leave this photograph here of yours truly, with my old pink Nissan “Figgy” Figaro a couple of years back, attempting to get my un-cooperative little sidekick, “Billie Holiday” into the passenger seat. Good times. 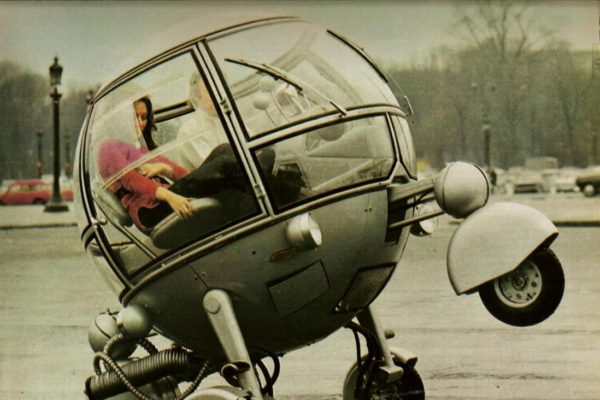 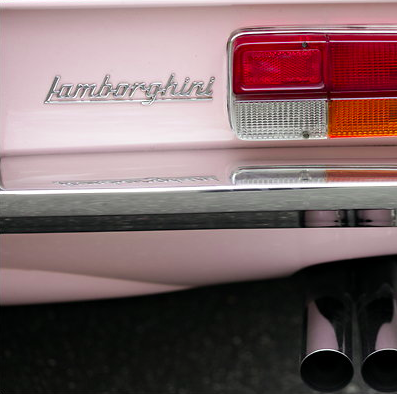 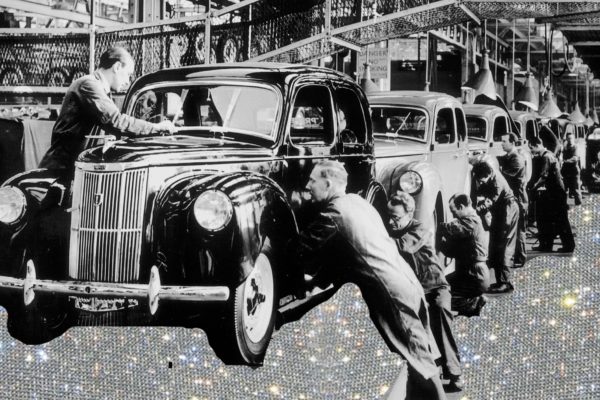 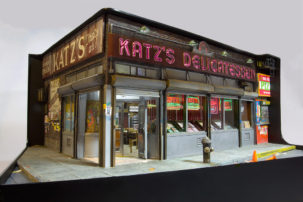