Did you know that during the height of Pablo Escobar’s reign as the King of c0caine in the 1970s, just for fun, he actually put the “Coca” back into Coca Cola and had it smuggled into the USA? (This is just the sort of eye-opening fact you learn from the addictive Netflix series, Narcos.) The folks over at Brooklyn-based art and culture website, The World’s Best Ever have also been gorging on the hit show and got to wondering: who exactly was the American consumer that was pumping all that money into Escobar’s pockets? 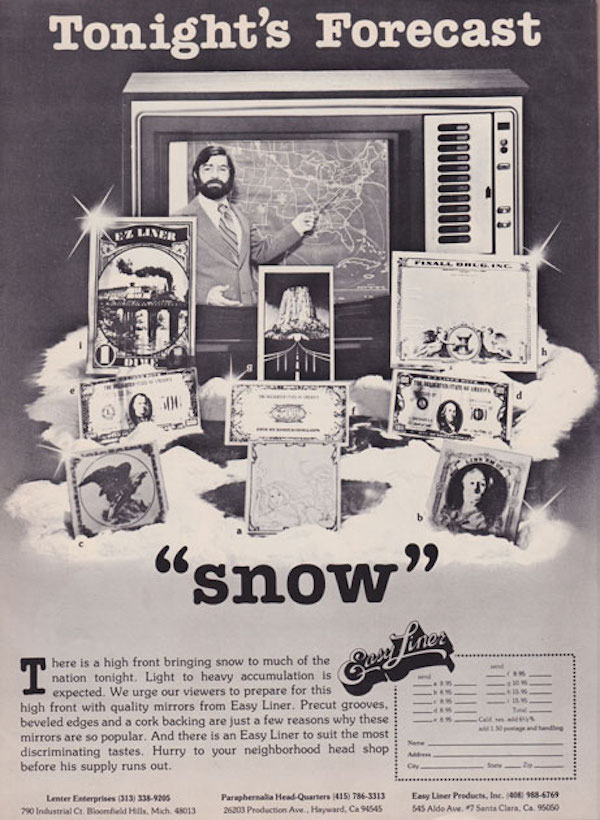 Who were the ‘one in ten’ Americans that made the drug lord an estimated $420 Million per week? (a large chunk of which had to be buried out in the Columbian jungle because there was too much cash to even possibly launder). To get a better idea of the consumer, the team went and tracked down some pretty outrageous advertising from the coke era between 1976 and 1981… 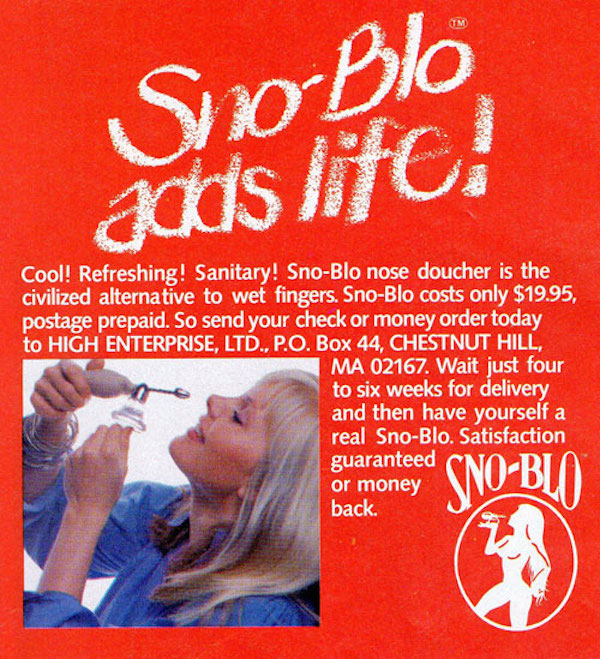 Some of the vintage adverts come from well-known magazines such as Hustler and High Times. With several referring to “c0caine” outright in the copy, the Mad Men-style glossy pages market luxury accessories from ivory snorting pipes to “chic” sterling silver cutters to protective nose wash. 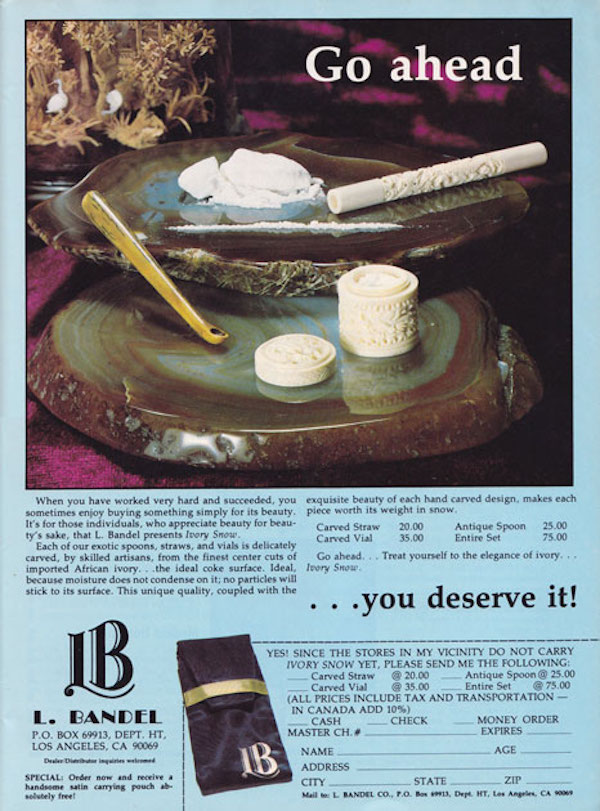 I’m not sure which is worse– the fact that this advert is marketing c0caine, or the fact that they wanted you to do it using the tusks of endangered animals (commercial Ivory was not banned until 1989). 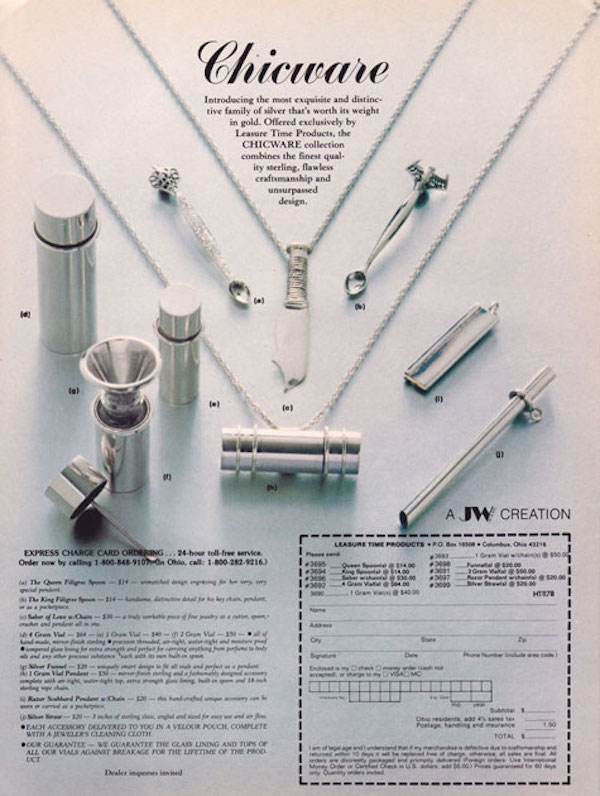 Was all this legal? You bet. While the Controlled Substances Act was passed in 1970, the statute declaring it illegal in the USA to “sell, transport through the mail, transport across state lines, import, or export drug paraphernalia as defined”, wasn’t codified until 1986. 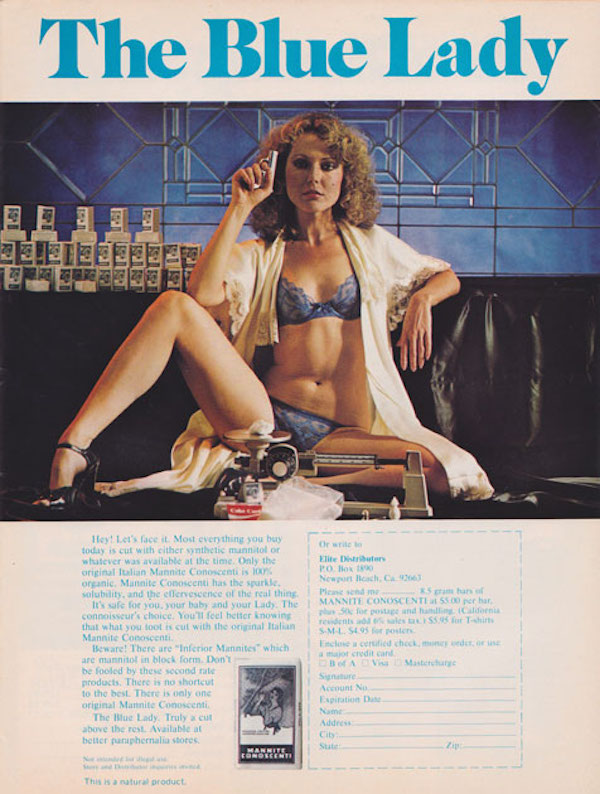 In the small print↑: “It’s safe for you, your baby and your Lady. The connoisseur’s choice … truly a cut above the rest. Available at paraphernalia stores.” 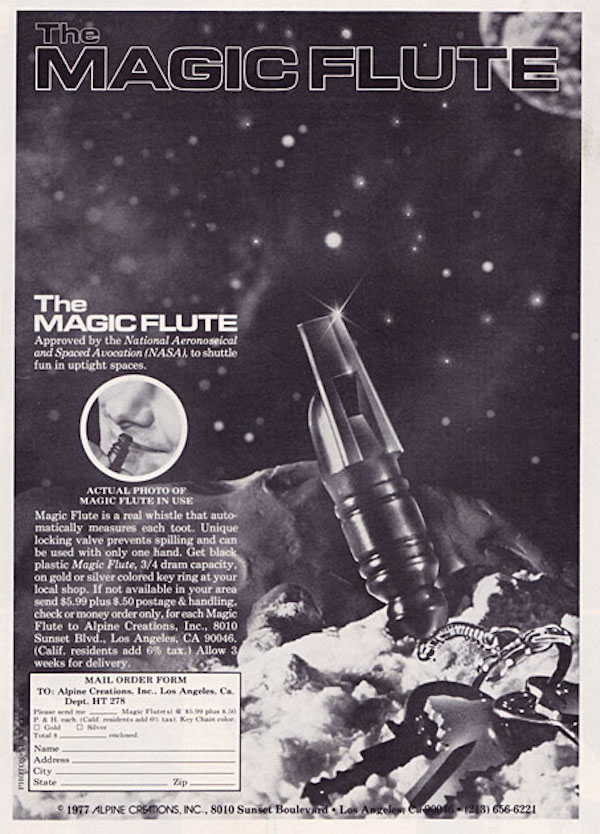 “Approved by the National Aeronoseical and Spaced Avocation (NASA), to shuttle fun in uptight spaces”. 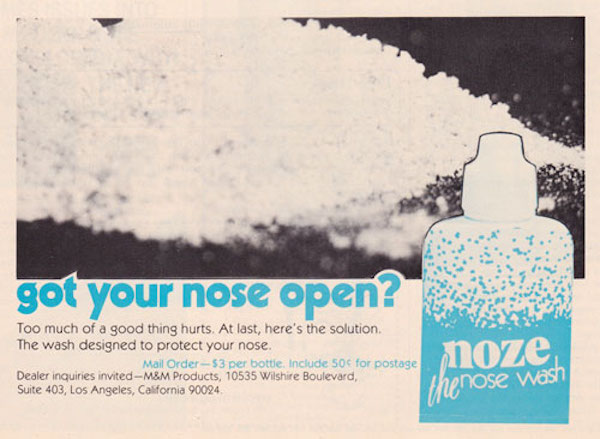 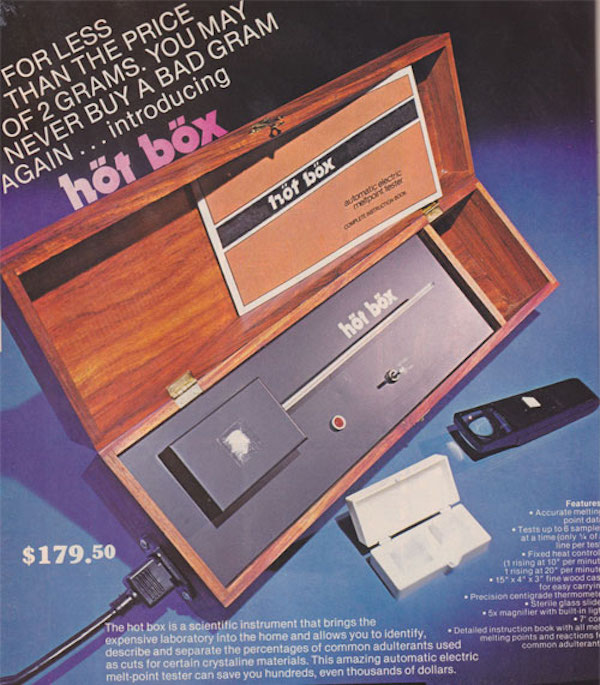 “This amazing automatic electric melt-point tester can save you hundreds, even thousands of dollars”. 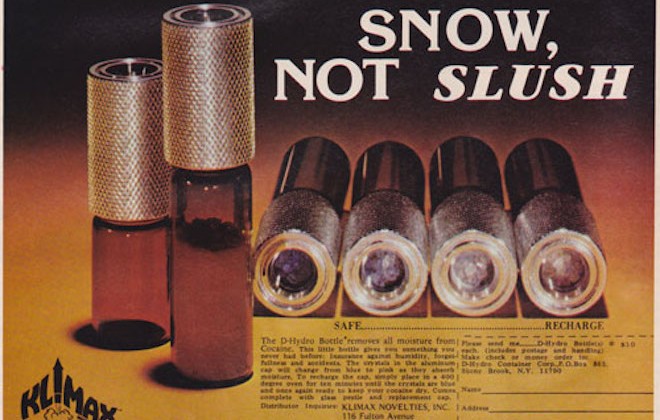 “The D-Hyrdo Bottle removes all moisture from C0caine. This little bottle gives you something you never had before”. 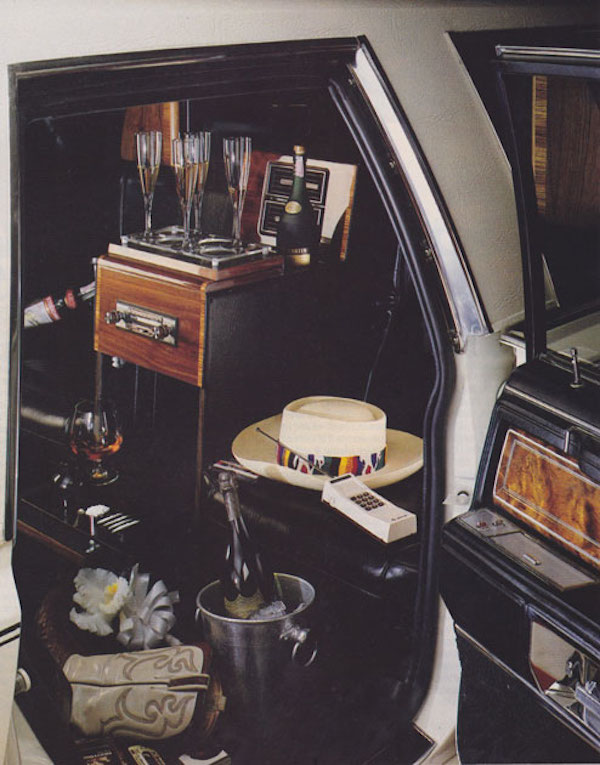 I think these ads do a pretty good job of revealing exactly who was the target American consumer of the C0caine Cowboys turned “Mad Men” marketeers. Guesses welcome in the comments…

See the full gallery of vintage adverts over on The World’s Best Ever. 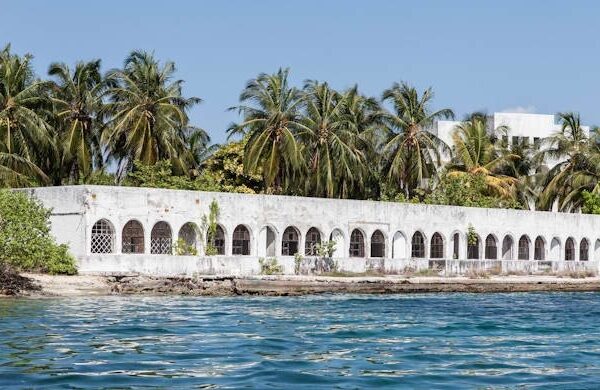 The Abandoned Holiday Villas of the Pablo Escobar Empire 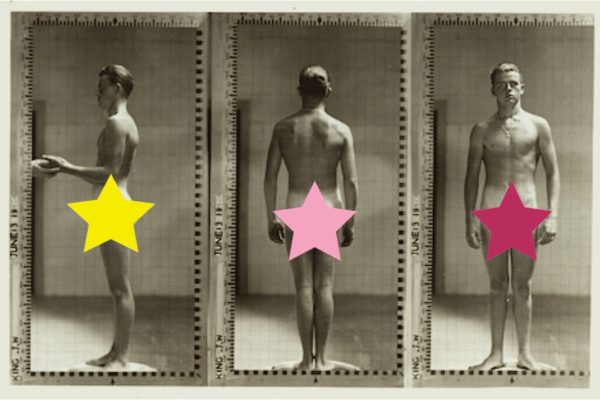 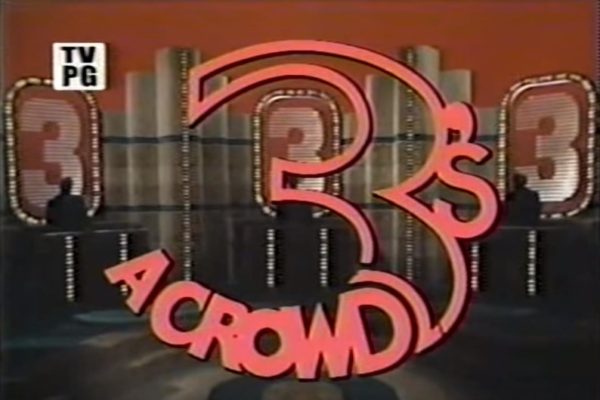 The Sleazy 70s Game Show for Husbands Sleeping with their Secretaries 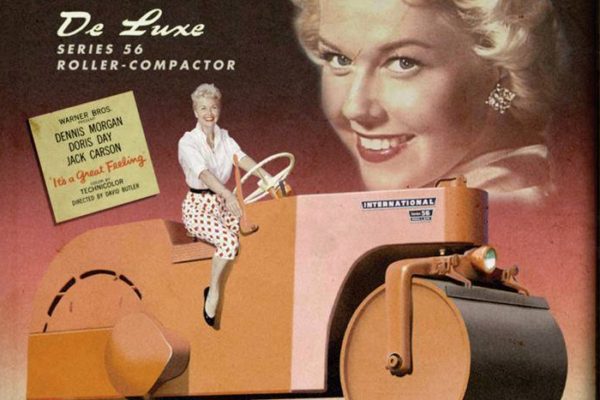 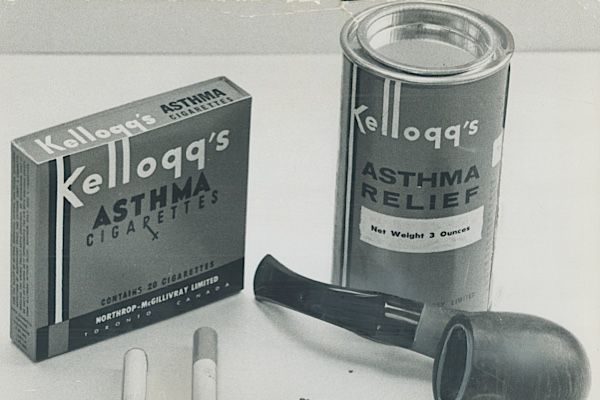 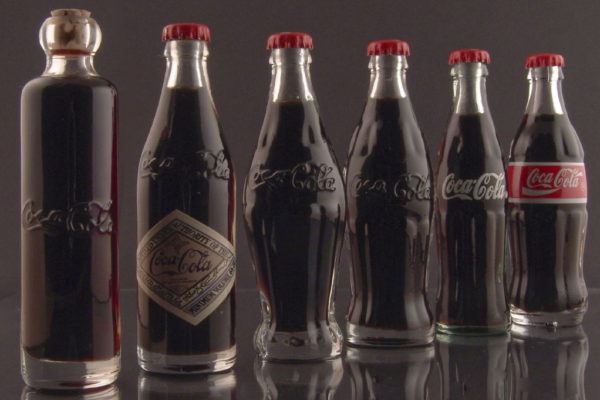 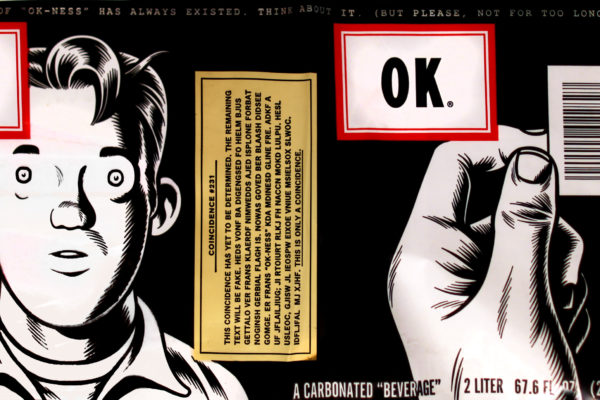 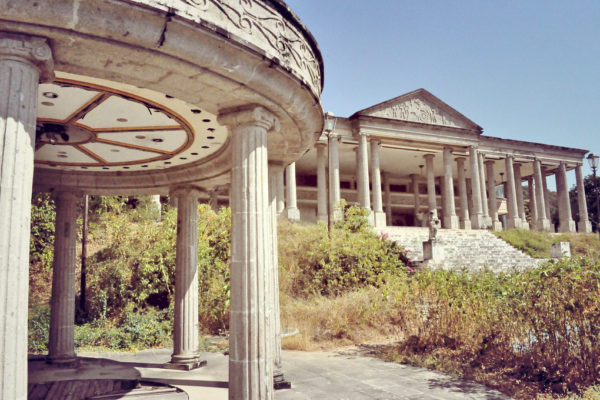 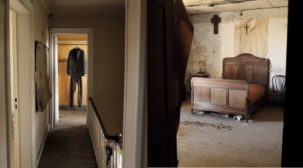