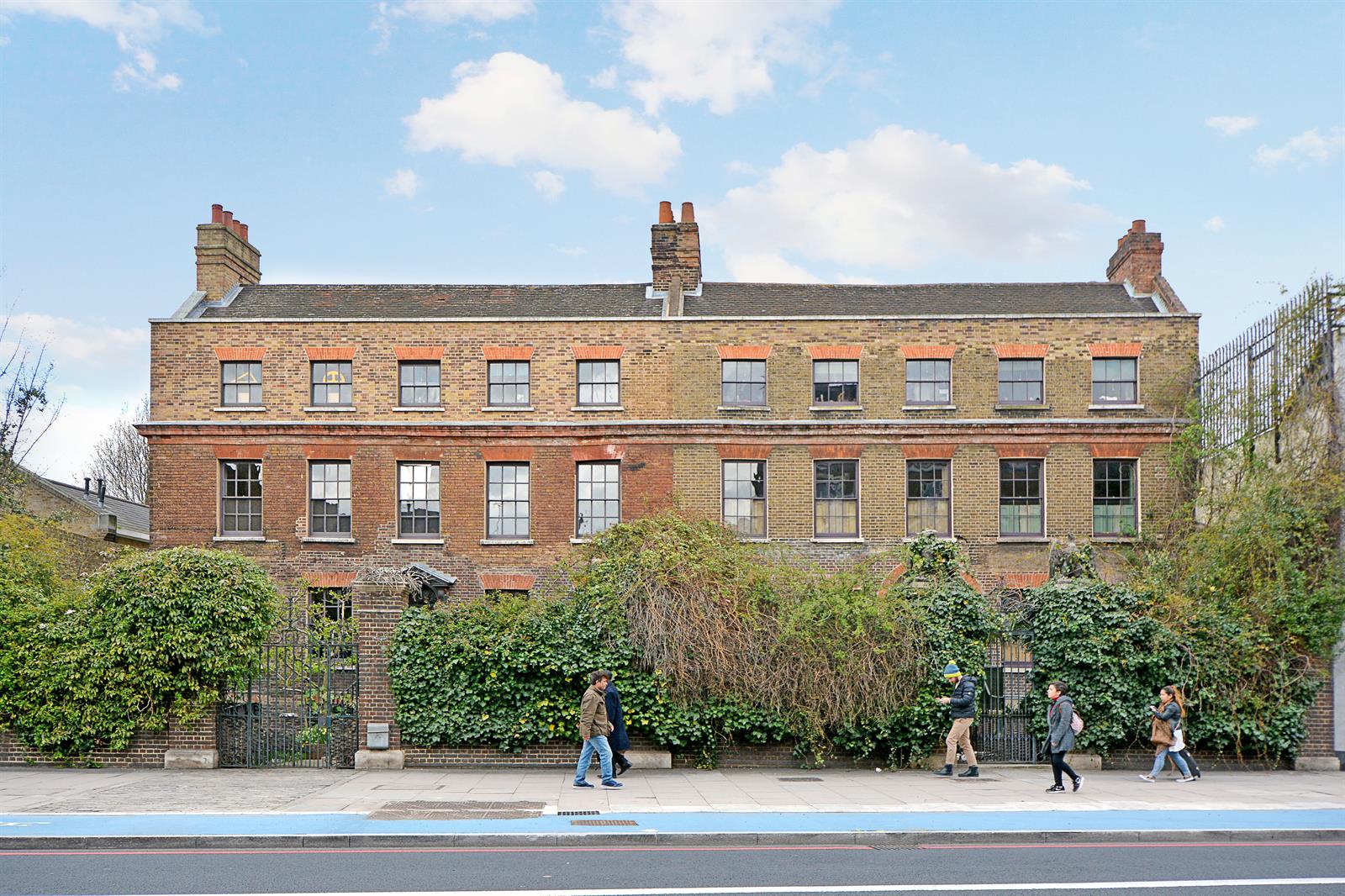 Malplaquet House is one of those places that makes everyone in the neighbourhood, or anyone walking past its mysterious overgrown gates, wish they could get a look inside. A home worthy of Miss Havisham herself, until recently this stellar cabinet of curiosities was one of London’s forgotten mansions, uninhabited for over a century, heading towards a fate of demolition… 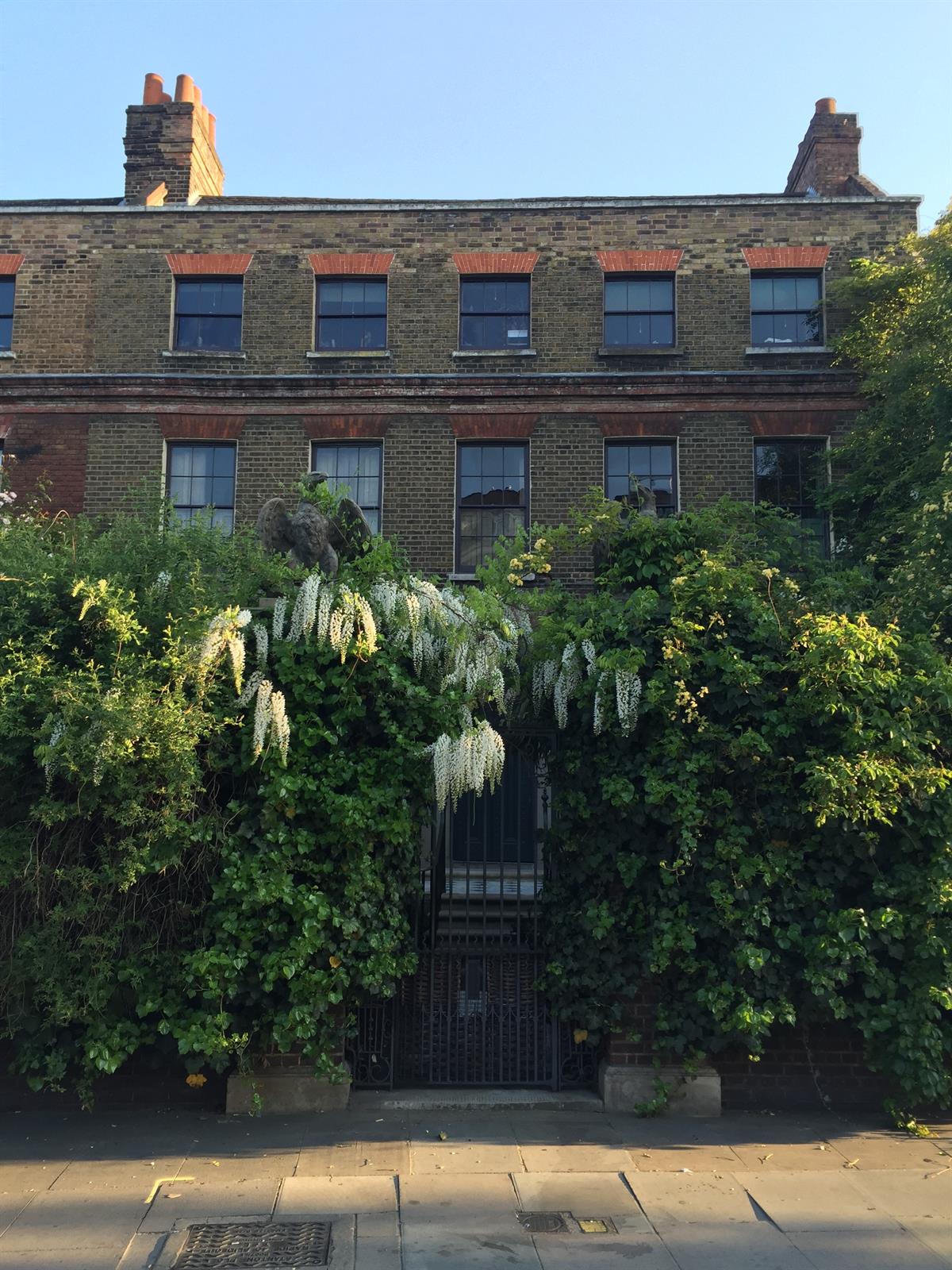 In the 90s, the four-story Georgian mansion on Mile End Road was rescued by the Spitalfields Trust and became a Grade II listed building. Malplaquet House had even more luck when it fell in to the hands of the best possible buyers imaginable. Enter Tim Knox, British historian, former director of Sir John Soane’s Museum, (another restored London time capsule) and now director of the Fitzwilliam Museum in Cambridge. Together with the renowned landscape gardener Todd Longstaffe-Gowan, these two passionate collectors purchased the 275 year-old East London ruin from the Trust for £250,000. A monumental restoration project began. 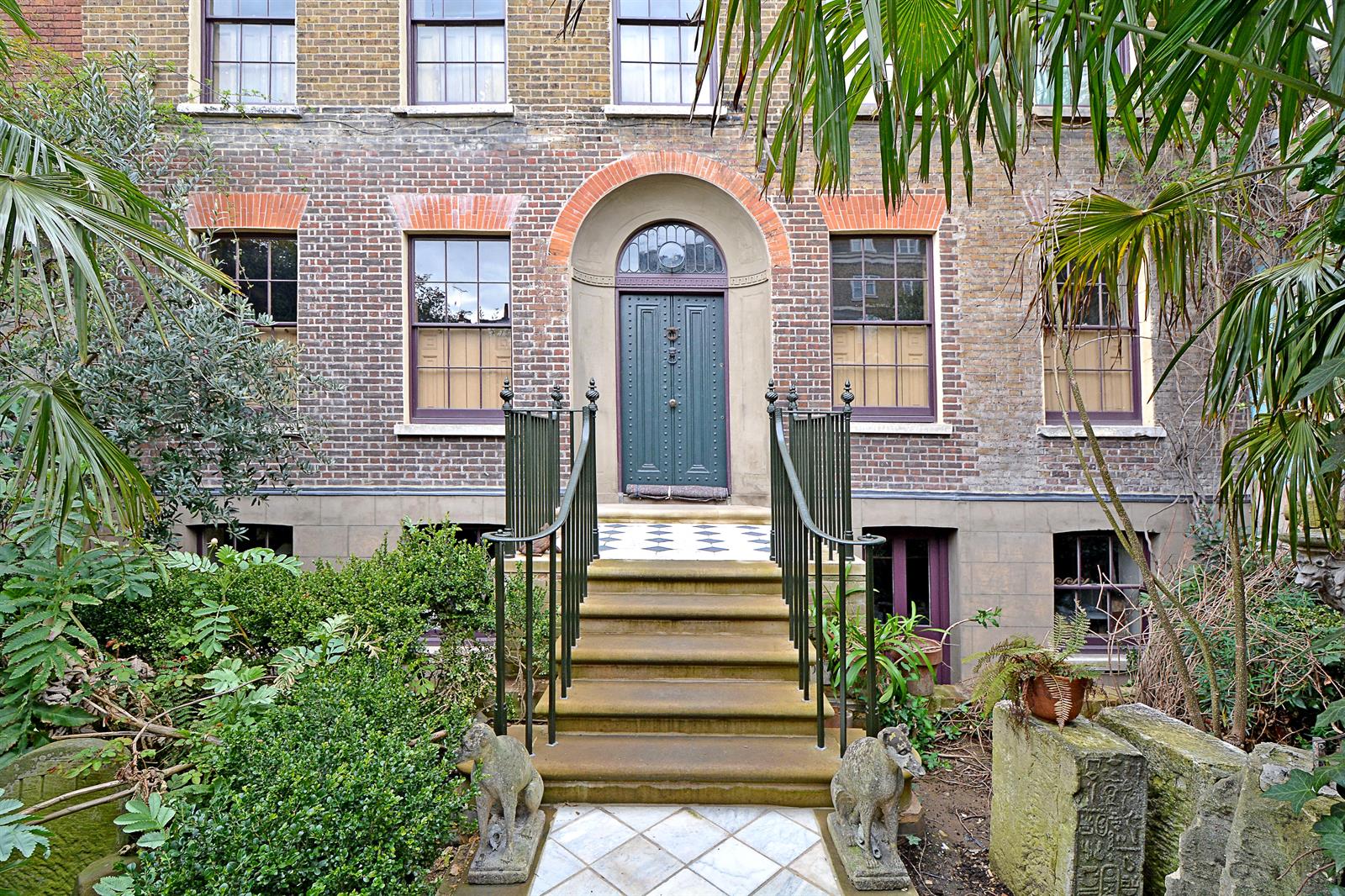 Over three centuries, the house had been extensively altered up until its last domestic residents were recorded in 1895. In the 1850s, Malplaquet had seen the last of its wealthy tenants and was divided up into smaller lodgings and two shops were built upon the old front garden. Most of the double-fronted property would eventually just end up as storage space for the shops. When Tim and Todd came along in 1998, they had their work cut out for them. 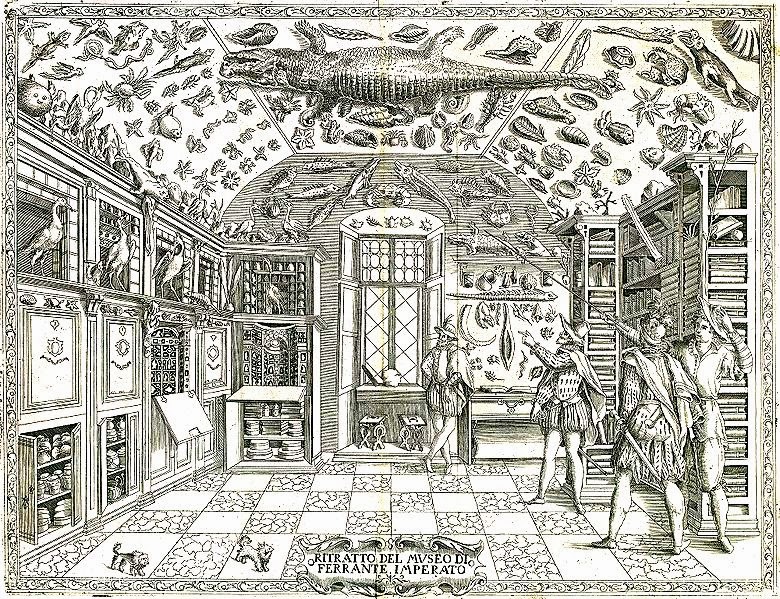 “Guided by historic documentation and surviving evidence, the forecourt shops were demolished, revealing the house surprisingly intact,” says Fyfe Mcdaid, the estate agency now listing the home for £2,950,000. “Since then the owners have carefully restored the building and its garden setting, making Malplaquet House one of the most unforgettable secret houses of London.” 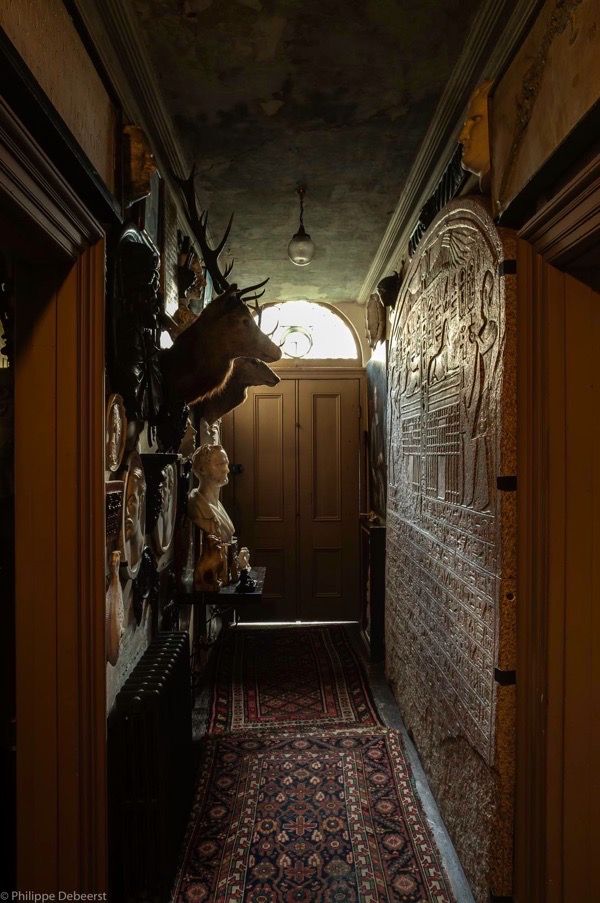 Unforgettable, spellbinding, thrilling romantic: these are all words that have been used to describe Malplaquet. Before the house went on sale, a local blogger, “The Gentle Author” visited the mysterious mansion and published his account along with some stellar photographs taken by Philippe Debeerst. 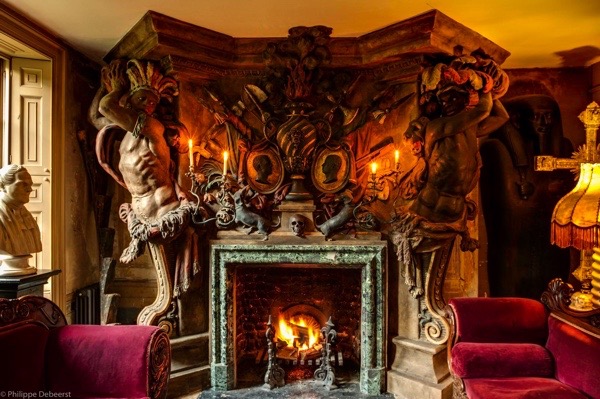 Hovering nervously on the dusty pavement with the traffic roaring around my ears, I looked through the railings into the overgrown garden and beyond to the dark windows enclosing the secrets of this majestic four storey mansion (completed in 1742 by Thomas Andrews). Here I recognised a moment of anticipation comparable to that experienced by Pip, standing at the gate of Satis House before being admitted to meet Miss Havisham. Let me admit, for years I have paused to peek through the railings, but I never had the courage to ring the bell at Malplaquet House before. 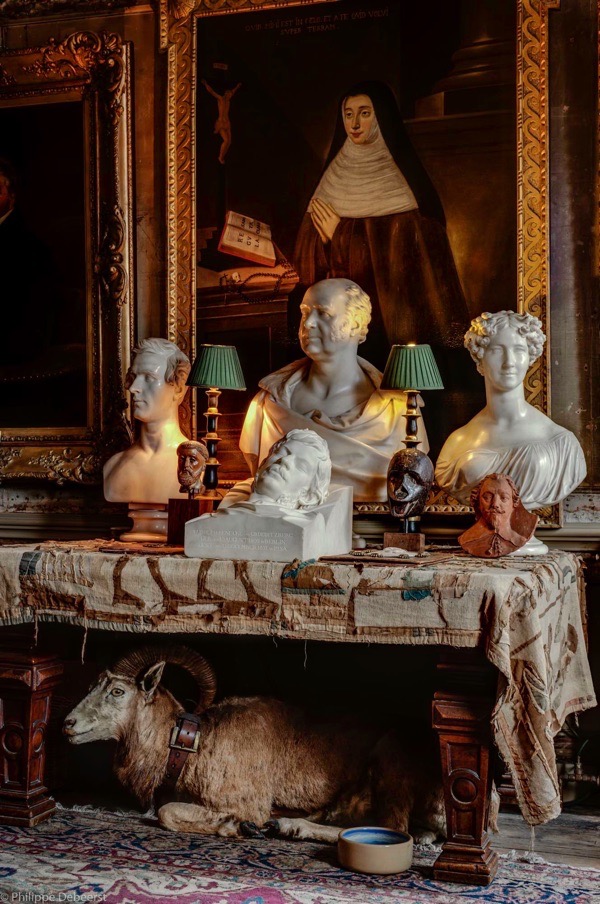 Ushered through the gate, up the garden path and through the door, I was not disappointed to enter the hallway that I had dreamed of, discovering it thickly lined with stags’ heads, reliefs, and antiquarian fragments, including a cast of the hieroglyphic inscription from between the front paws of the sphinx. 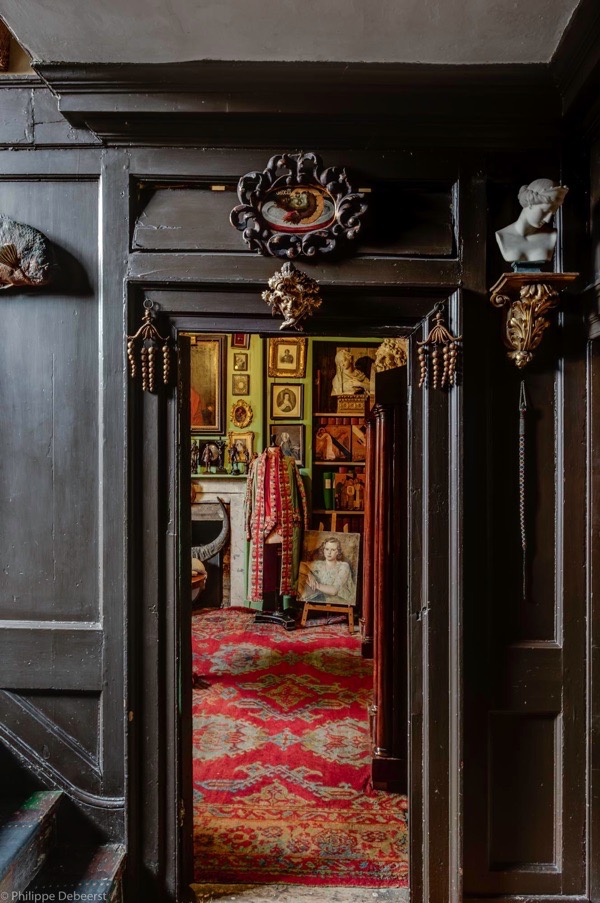 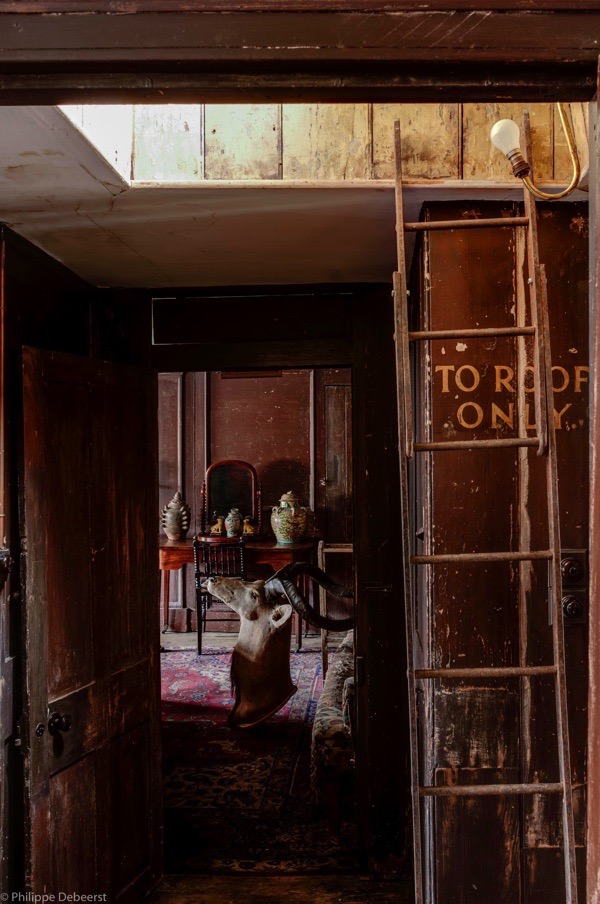 As even a cursory glance at the photos will reveal, Tim & Todd are ferocious collectors, a compulsion that can be traced back to childhoods spent in Fiji and the West Indies. They have delighted in the opportunities Malplaquet House provides to display and expand their vast collection of ethnographic, historical, architectural and religious artefacts, natural history specimens and old master paintings. 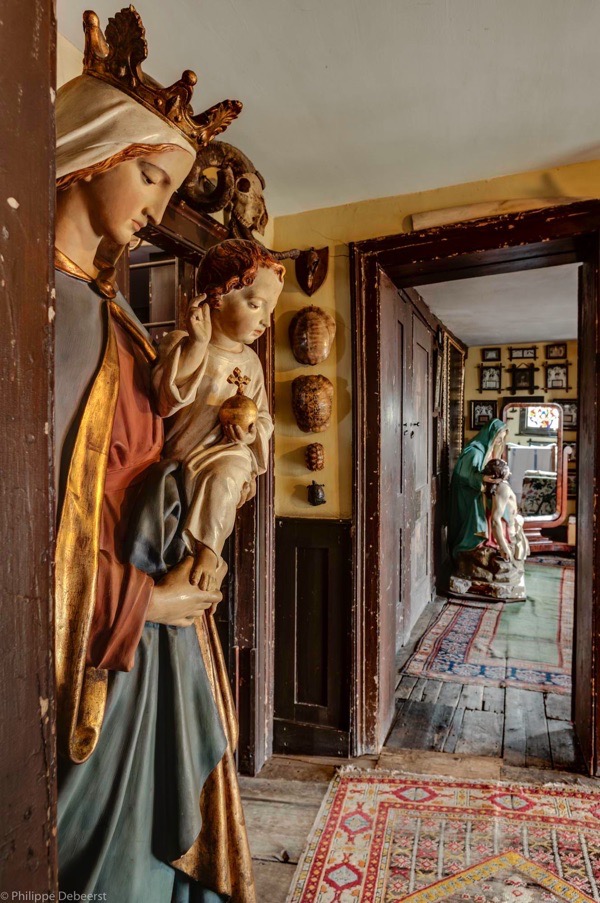 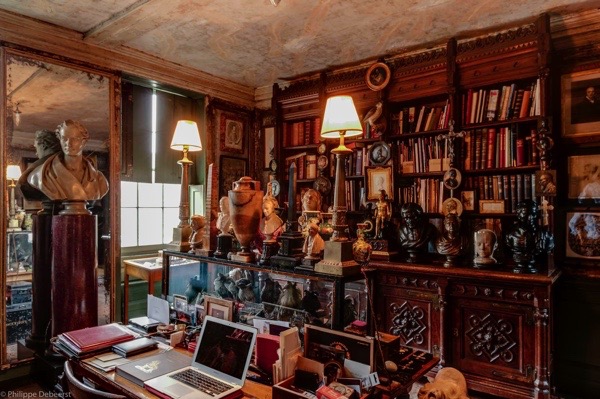 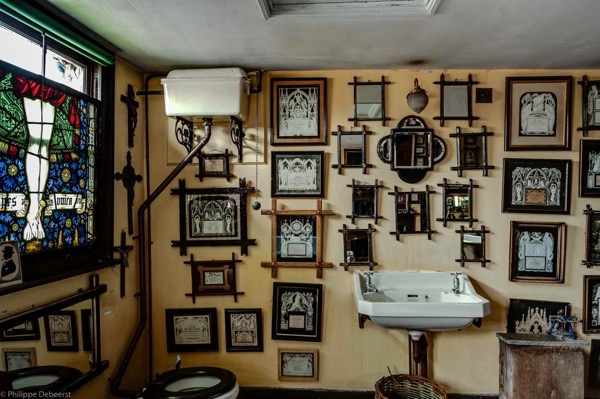 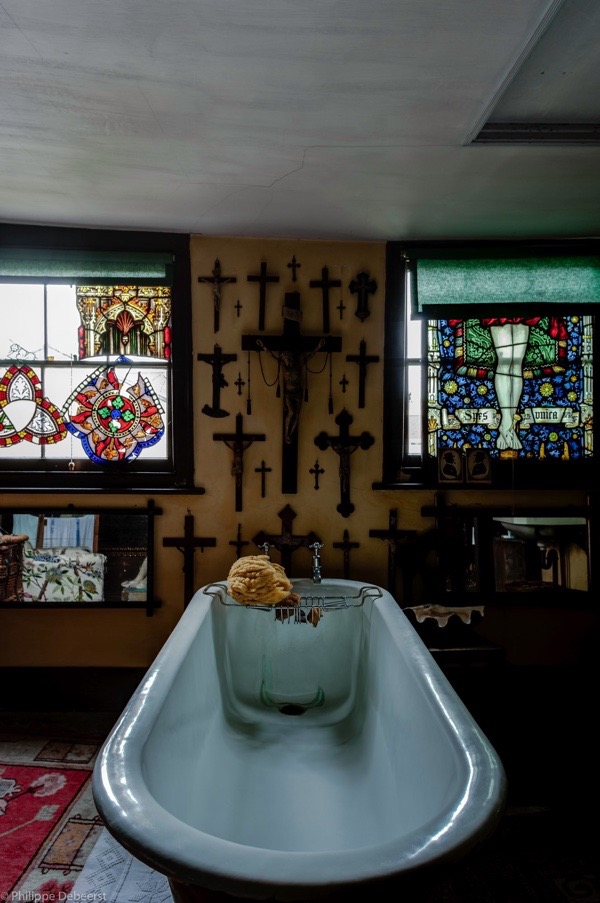 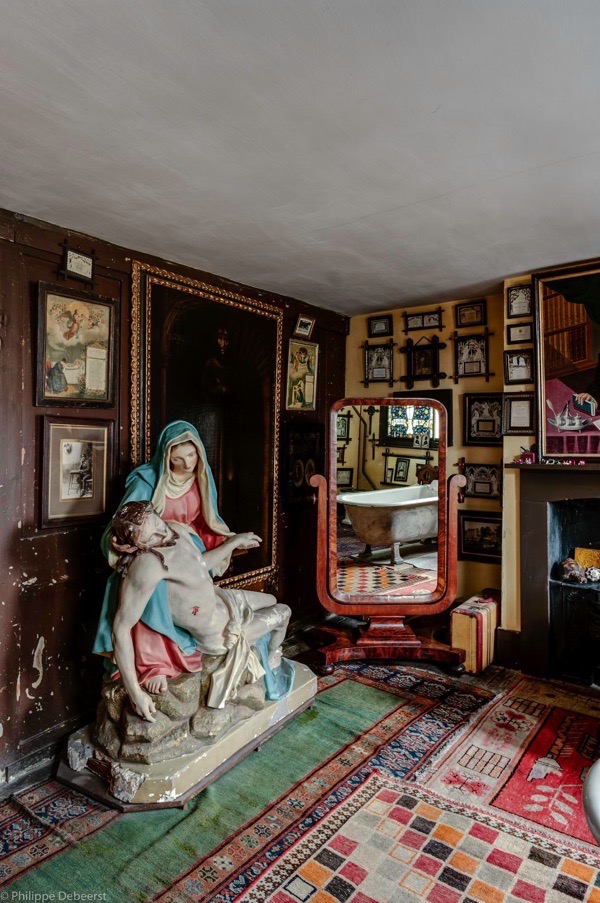 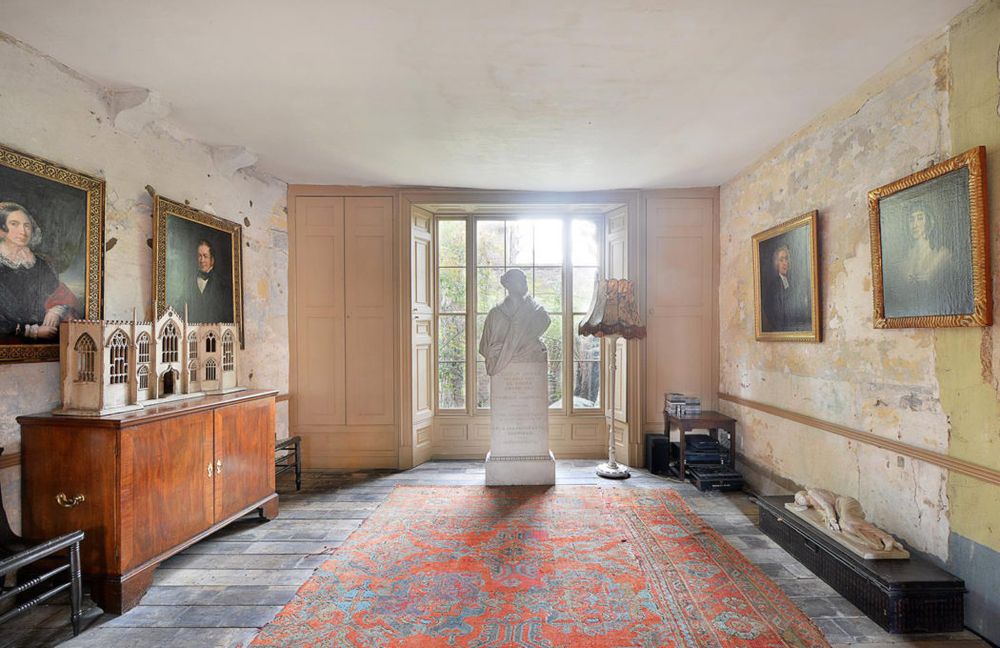 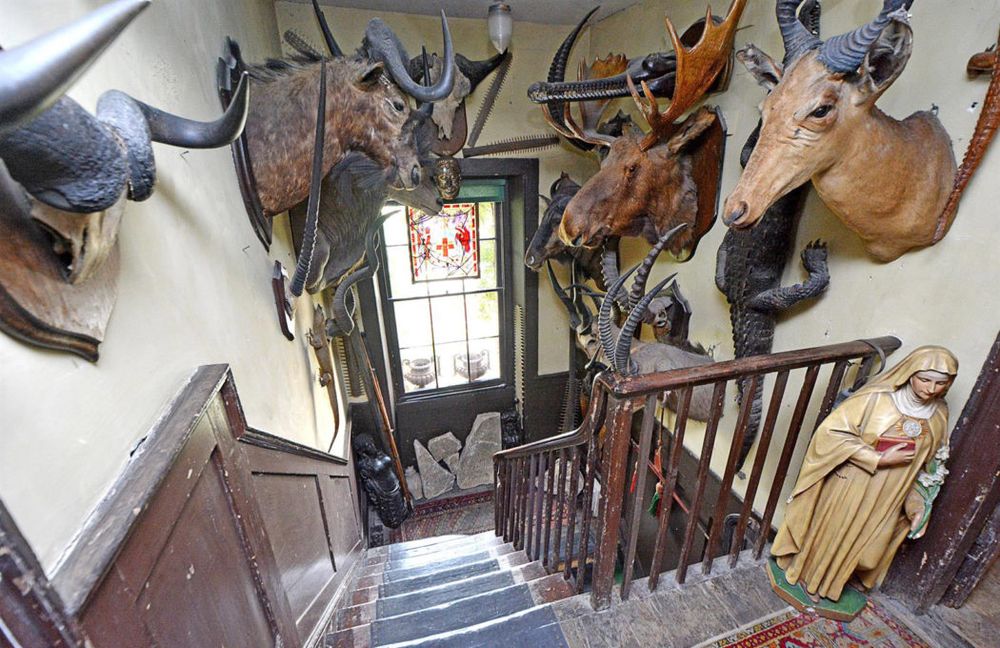 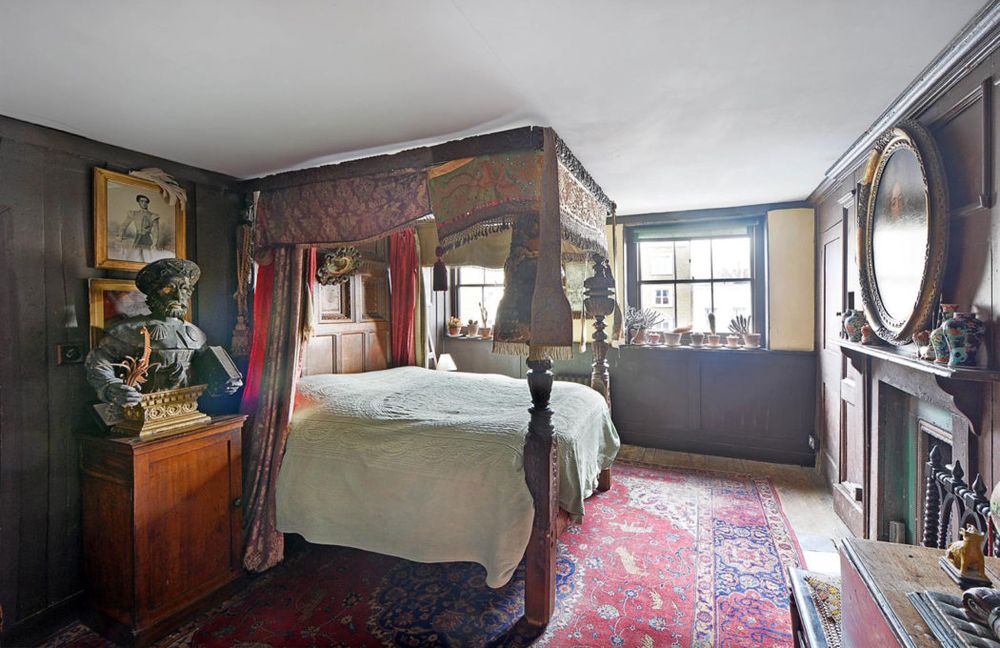 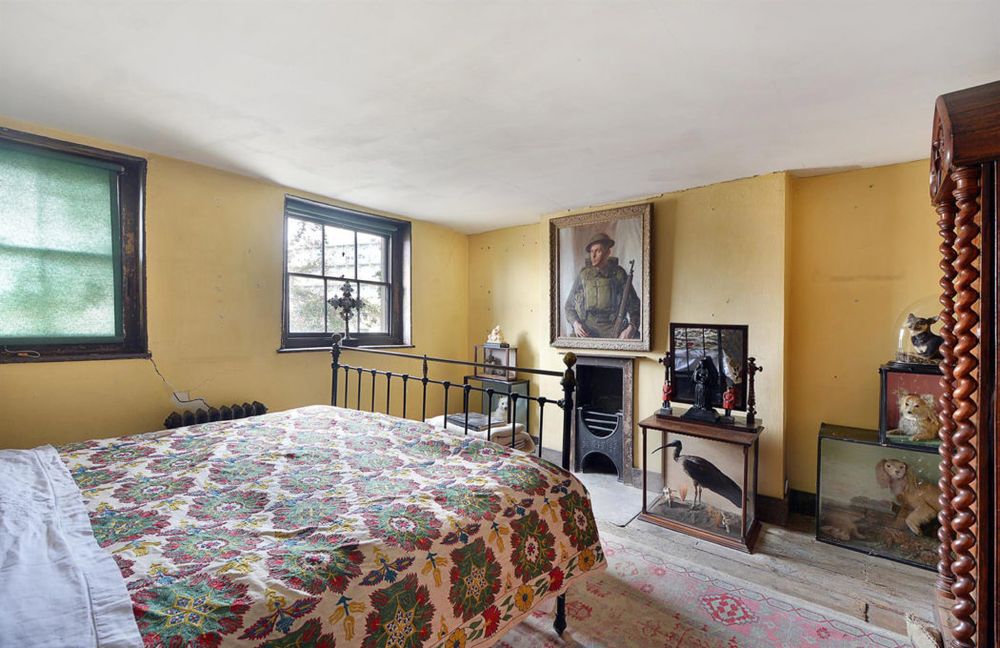 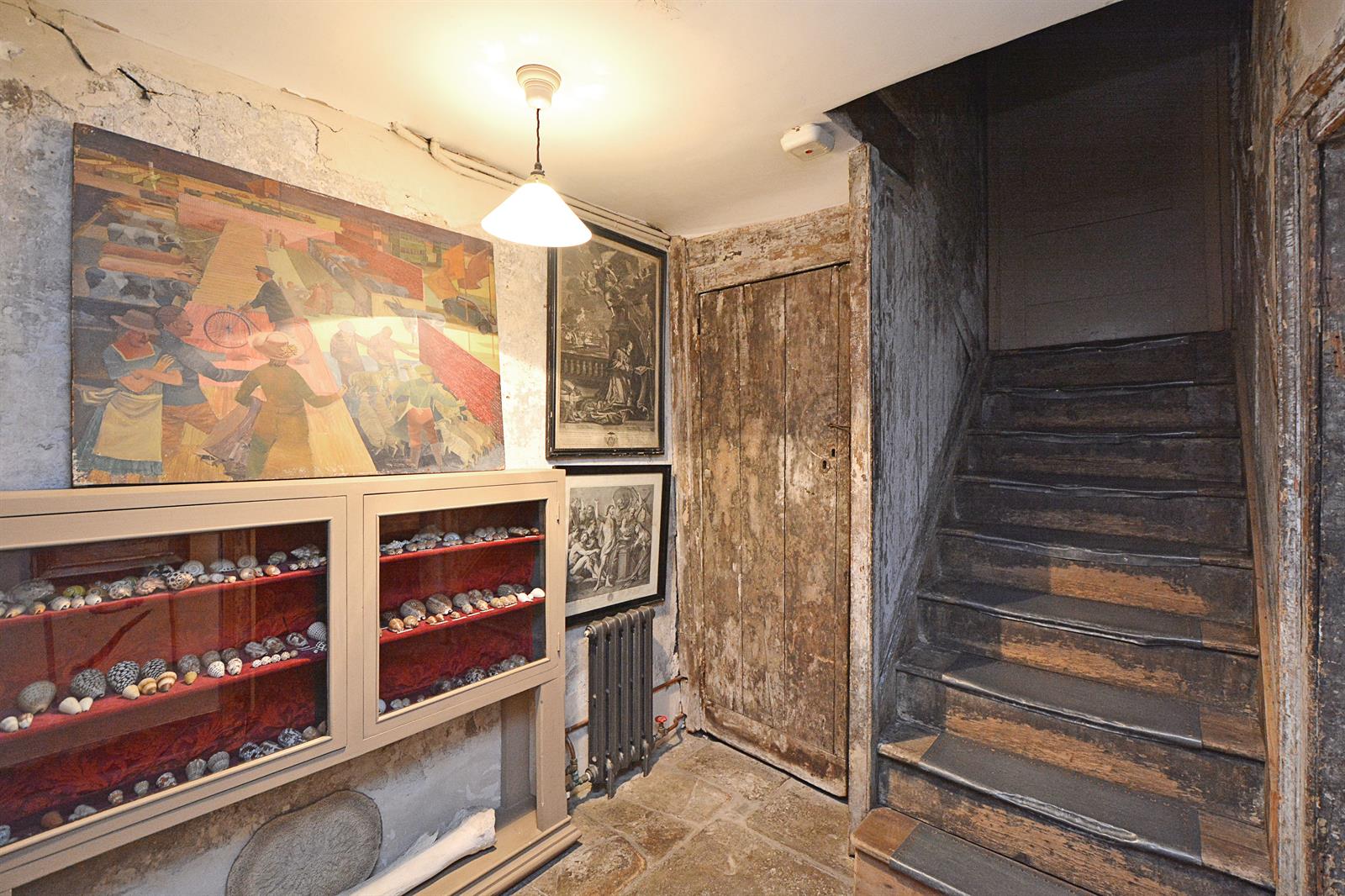 It is a paradox of submitting to the spell of this remarkable house that the familiar external world is rendered exotic by comparison … I have been in older houses and grander houses, but Malplaquet House has something beyond history and style, it has pervasive atmosphere. It has mystery. It has romance. You could get lost in there. When I came to leave, I shook hands with Tim and lingered, reluctant to move,  because Malplaquet House held me spellbound.

Read the full account of the visit + find more photos on Spitalfields Life. 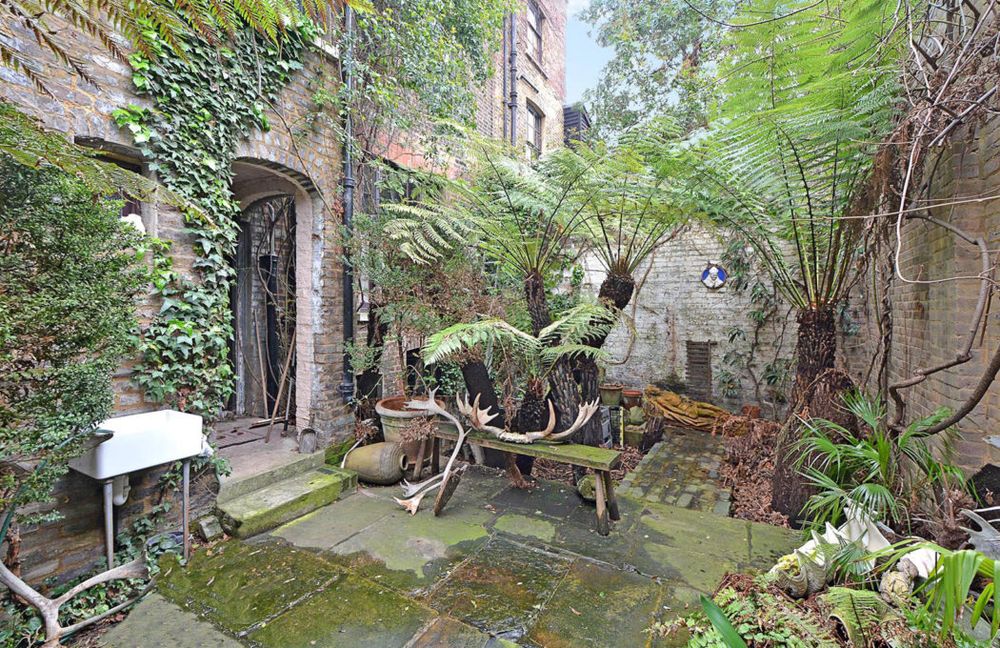 Malplaquet House is for sale with Fyfe Mcdade. 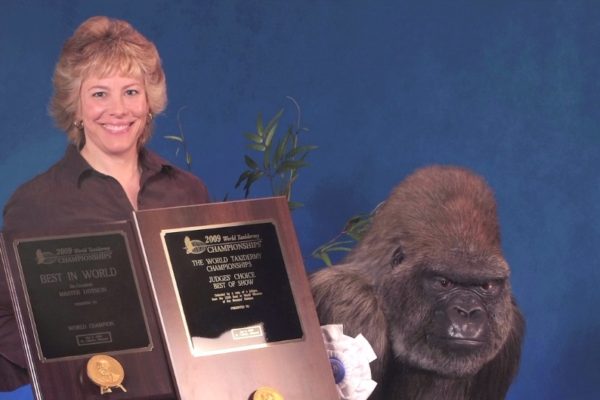 Inside the Olympics of Taxidermy 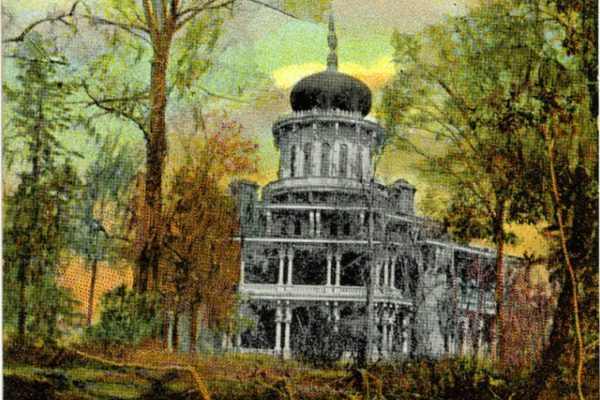 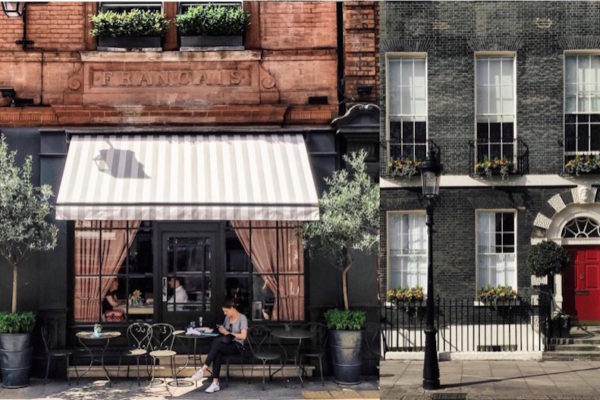 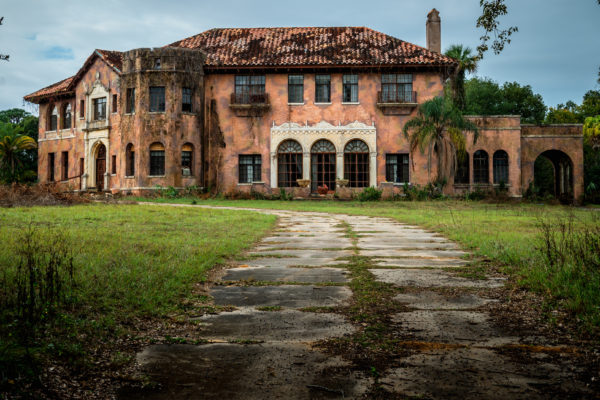 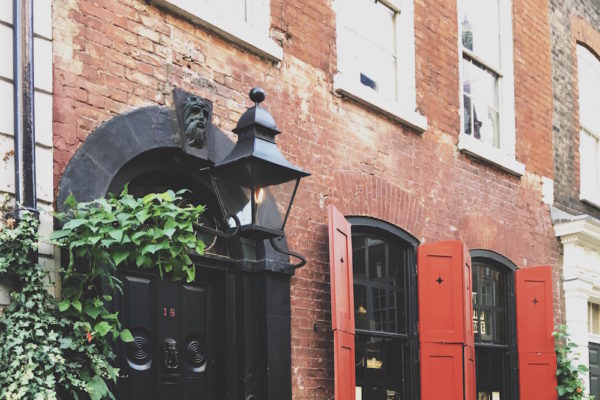 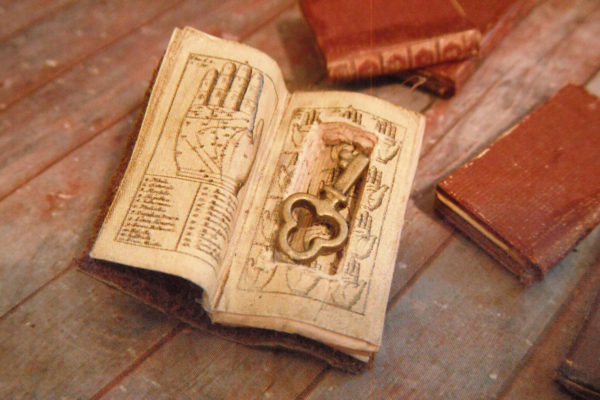 The Prima Ballerina who had the Real Swan Lake
13 Things I Found on the Internet Today (Vol. CXCIII)