Perhaps it’s because we share the first name (yes, if you haven’t figured it out, Nessy is short for Vanessa), perhaps it’s because she’s a Parisian and I’m now attempting to call myself one or maybe it’s just because we both like Johnny Depp– whatever the reason, Vanessa Paradis is my girl crush du jour. I stumbled across one of her old music videos from the 90s on Youtube (I love digitally stumbling all over the internet) and was literally mesmerized. I’ve posted this (actually rather good) song at the bottom of the article after a series of images I found of the French actress that I hadn’t seen before. I will say that I prefer to look at the earlier images of Vanessa when she was younger, when everyone was comparing her to Brigitte Bardot. I had always wondered why the media had ever dubbed her a Bardot lookalike. Other than the gapped teeth, I couldn’t see the resemblance between Bardot’s buxom-blonde looks and Paradis’ delicate facial features that she has  now grown into. But in these first few images of Vanessa in her teens and early twenties (she became a star in France at 14), you can really see a definite reminder of the 60s style icon.

This was probably the picture that did it for me! SO cute!

Vanessa with father of her children, Johnny Depp.

Below, another woman that Vanessa has a strong resemblance to…

Depp and Moss dated during the 90s

I’m not actually going to start comparing Vanessa Paradis with Kate Moss now because that would be like comparing Paris to London and lord knows I do enough of that on this blog.

With a style totally unique to her and with the air of an old soul (perhaps Brigitte Bardot’s), Vanessa Paradis is my girl crush du jour. 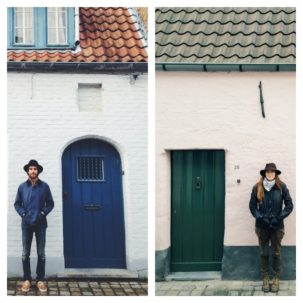 5 Off-Beat Reasons to do a Weekend in Belgium