The Mysterious “Order of the Odd Fellows” that frankly, belongs in a Wes Anderson Movie

It’s a name that had me instantly transfixed, like something Wes Anderson had dreamt up for his next film. The Independent Order of the Odd Fellows – a secret society for … odd people? Why had I never heard of it? Never one to resist the pull of a promising rabbit hole, I would soon discover that the international fraternity I’d accidentally stumbled upon had existed for centuries, possibly longer, and at one point during America’s “Golden Age of Fraternalism”, grew larger than the Freemasons. Some of history’s most notable eccentrics are counted among its past ranks: Charlie Chaplin, P.T. Barnum, Charles Lindbergh, Wyatt Earp and Al Pinkerton were all members, as well as heads of state as high up as Winston Churchill and Franklin & Eleanor Roosevelt. The order’s vehement use of esoteric symbolism and highly secretive initiation rituals (involving human skeletons) would no doubt send masonic conspiracy-theorists on an epic tangent. So in the interest of uncovering life’s little oddities, here’s what I could dig up on the secret society with a name so alluring, you might just be wondering: would I be odd enough for the Order of the Odd Fellows?

The Odd Fellows are one of the earliest and oldest fraternal societies, but the historical details of its foundations went strangely undocumented before the 18th century, creating some uncertainty about its name and origins. To understand what the “odd” in Odd fellows really means, we need to start with the order’s purpose. For as long as records show, this has been an organisation solely aimed towards charity and helping the less fortunate. One of its most prominent symbols known as the “Triple Links” alludes to its motto, “Friendship, Love and Truth” – three words that aren’t hard to get behind in modern civil society. But not so long ago, such noble values were rare to come by…

In the 18th century, with the beginning of industrialization, it was indeed considered “odd” to commit oneself to the principals of charity and communal welfare. It’s been suggested that founding members might have been branded as odd due to the apparent strangeness of following noble values such as fraternalism, benevolence and charity.

Another theory proposes that the order was formed by individuals who had “odd” careers or exercised unusual trades, and naturally gravitated towards each other socially and professionally, likely evolving from Medieval guilds to form an “odd fellowship”.

The founders of the first American lodge in 1806 were three boat builders, a comedian, and a vocalist – arguably an usual mix of niche professions. The oldest surviving record of an Odd Fellow lodge however, can be traced back to the minutes of meeting at Lodge no.9 in England circa 1748 (no.9 implying that there would have been at least 8 others before it).

The names of several British pubs today suggest past affiliations with Odd Fellows (or Oddfellows). There has been some effort to trace the order’s origins back to Antiquity, linking the name to the odd ceremonies and signs used by Roman Emperors, but the Oddfellows themselves admit, “the exact origin of Oddfellowship is involved in obscurity”.

The society was founded as a non-political and non-sectarian fraternal order, but of course, that hasn’t stopped religion, war and political beliefs getting in the way of progress. At the height of the “Golden Age of Fraternalism”, when as much as 40% of the adult population in the United States alone was estimated to be a member of at least one fraternal order, the Catholic church widely condemned secret societies, forbidding their pseudo-religious rituals and ceremonies. The Order of the Odd Fellows is no stranger to the conspiracies and rumours of witchcraft and satanic worship that may or may not take place behind closed doors…

Police have often been called to investigate multiple skeletons discovered hidden in Odd Fellows lodges which are used in the secret society’s initiation rituals. In 2001, the LA Times reported that the discovery of numerous “Jane Doe” skeletons at the order’s fraternity halls in recent years had sparked outrage and police investigations across the country, including Missouri, Indiana, Pennsylvania Oklahoma and Nebraska.

A longtime Odd Fellow from New York revealed that the skeleton, or skull & bones, is a symbol of mortality for the order, and isn’t to be seen by anyone until they’ve been initiated. Passwords and decrees are exchanged. Another Odd Fellow speaking to the LA Times, preferring to remain tight-lipped on the subject said it’s “a ceremony that is confined to the members, and if you’re not a member, you don’t discuss it.”

Over the centuries, politics have also succeeded at dividing the order. In England, the Jacobean uprisings created new and separate branches according to political loyalties. Following the American Revolution, the American order split from the British, and in the aftermath of the American Civil War, it split again – the whites-only order staying in one camp and a new branch, open to people of any race, in the other.

James McCune Smith, the first African American to hold a medical degree and the first to run a pharmacy, was one of the leading members of the Grand United Order of Odd Fellows in America that celebrated black pride long before the Civil Rights Movement.

Interestingly, the Order of the Odd Fellows became the first national fraternity to accept both men and women when it formed the Daughters of Rebekah in 1851. Eleanor Roosevelt would later become a member.

The predominantly African-American branches of Odd Fellows also functioned alongside a female auxiliary from the 1850s known as the Household of Ruth, which attracted nearly 100,000 members, including Georgia Dwelle, the first female African-American Physician.

In 1922, the Oddfellows reported over 2,676,582 members, outnumbering the Freemasons. But then came the Great Depression. People simply couldn’t afford memberships and lodges closed.

Bringing about recovery and reform following Depression, Roosevelt’s government welfare programs and the rise of commercially-available insurance made the role of mutual aid fraternities like the Odd Fellows less vital. Some fraternal orders and societies evolved into insurance companies, but the Order of the Odd Fellows lost more than 20% of its membership in just 10 years and has gradually and continuously declined since.

In order to increase membership and reach a younger generation, branches are absorbing female auxiliaries into the main order, leading to the idleness of the female-run orders like the Rebekahs, while also creating a more inclusive and gender-balanced fellowship overall. The IOOF now claims to have 600,000 active members in the United States. With international branches in 26 countries, members of the fraternity combined are estimated in the millions worldwide. From New York to Nigeria, Philadelphia to the Philippines, you never know where you might find clues to an Odd Fellow lodge.

Much like the Freemasons, the Odd fellows liked to leave their mark with esoteric symbolism and clues in the architecture of buildings they constructed for their network. Perhaps there’s an OOF lodge, or even an Odd fellow cemetery near you. There are some 10,000 lodges in the United States alone, dozens of which are also home to historical museums and small exhibitions across the country, holding collections of Odd Fellows regalia, archives for research, antique items and of course, oddities. They’re mapped here. Many lodges still hold weekly meetings and today promise to be “a place for fellowship in all its forms, from hanging out and just having fun, to discussion, to networking, to collaboration on creative and constructive projects”.

On the Independent Order of the Odd Fellows website, membership benefits include “an international social network of brothers and sisters that extends to 30 countries worldwide. If travelling is an interest, membership can provide a valuable network that will very much welcome an international visitor, and assist in their enterprises, and certainly their travels wherever possible.”

Keep an eye out for the Oddfellow letters and symbols on your urban adventures. There’s also a considerable amount of Oddfellows regalia and esoteric items for sale on eBay. And if you’re curious enough, you can find out more about the Oddfellows Order on their website here. The organisation remains committed to its most prominent symbol linking the letters F, L and T, for “Friendship, Love and Truth”. So if you’re looking to make new friends, this sounds like a promising gathering of odd souls. It also sounds like the place to inspire a really good story, one preferably told through the lens of Wes Anderson.

The Keys to Amsterdam’s Secret Chapel B&B
13 Things I Found on the Internet Today (Vol. CDLXXXVI) 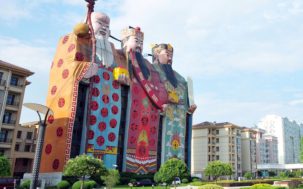