It’s like Medieval Times, with a kiss of psychedelia. A book in which strange globules float freely, alien plants shimmy across the pages, and female figures slide into a pool of green plasma. Binding them all together? A beautiful, albeit entirely indecipherable script by an unknown author. The “Voynich Manuscript,” is an ancient codex that after even 600 years has yet to be credited to anyone or cracked by the brightest philosophers, mathematicians or computer scientists. Even the Nazi codebreakers had a go. Like eager suitors, it seems they’ve lined up in vain to coax the truth from the text that just won’t reveal its secrets…

Here’s what we do know. The Voynich Manuscript is a meaty volume, made from at least 14 whole cow skins. Carbon dating tells us that its 240-pages hail from the 15th century. So off the bat, we can dispel theories that the book is a modern hoax.

We also know it is both contextually and literally crawling with plants, as Yale researchers have revealed that the book’s beautiful drawings were made from pigments of fruit, nuts, egg, and wine.

Plant specialist Dr. Edith Sherwood claims to have found the contemporary equivalents of many of the strange flora and fauna depicted in the codex, which she says hail from the Mediterranean region – but an academic consensus on their identification, even their very existence, hasn’t been reached. “The book begins with an herbal section,” reported Smithsonian in 2017, “but no one is quite sure what sort of plants they are supposed to be.”

It also wasn’t uncommon for medieval drawings of beasts and plants to look odd – often, they were drawn off second-hand description and with whatever pigment was available. Even Albrecht Durer hadn’t actually seen his famous 16th century rhinoceros:

If anything, the manuscript’s drawings look stranger to us today than they would perhaps to a person alive in 1487. All of this to say: without serious study, this codex will continue to fold into its own strangeness as time goes on, further obscuring its reality, damnit. Our minds hold fast to logic, while our hearts leap for links to tales worthy of Indiana Jones. Could it reveal something about the legend of Atlantis? The divinely creepy plants and critters of Hieronymous Bosch’s Garden of Good and Evil? Is it an inter-dimensional message from Carl Sagan, attempting to beam us up as we speak? We should be so lucky.

But absence of evidence, as they say, is not evidence of the absent…

There’s a trend of evidence that it might be some kind of medical text. Comparatively not as exciting as being authored by aliens, but consider this: there was no divide between spirituality and health in the Middle Ages. Not just for men and women of the church, but everyone. If you went to the doctor with haemorrhoid, he’d burn it off with a hot iron and say you must’ve skipped a prayer. So if we could understand the advice on these pages, it’d undoubtedly be deliciously strange.

Perhaps that’s why the authorship is obscured – it may be a very naughty book. You didn’t want to anger the Church in the Middle Ages, and risk getting stoned to death. Hence, why so many thought-provoking texts were often written in code or under a pseudonym. Better safe than stuck in the pillory.

Records about how brain-busting this manuscript has been can be traced back centuries. Holy Roman Emperor Rudolph II thought it might’ve been written in the 13th century by a famous alchemist, Roger Bacon, but the carbon dating has since disproved that theory. In the 17th century, one of our planet’s greatest scholars, Athanasius Kircher, was asked to study it by alchemist Georg Baresch, who was at his wit’s end with the strange “Sphinx” of a text. Kircher, despite the fact that his own drawings echoed the Voynich’s groovy globulars, wasn’t interested.

It wasn’t until one of Kircher’s own pal’s acquired the book – and was also stumped by it – that it made it into the scholar’s library. Apparently, it remained there collecting dust for years.

It’s around that time when the book disappeared from recorded study for a good 250 years. Where it went, we can only imagine. Sleeping in Kircher’s library? Sold off? Serendipitously rescued from the trash?

In 1912, the text reemerged from its mystery hibernation, this time, it was purchased by bookseller Wilfred M. Voynich from a Jesuit college in Rome – a fact that he strangely decided to take to his grave, and was later revealed by his wife. Apparently, the Collegio Romano was clearing out its closets and donating many of its volumes to the Vatican. The Voynich manuscript, for whatever reason, didn’t make the cut. Lucky Voynich.

Fittingly, the manuscript took the namesake of this passionate collector, who spent the rest of his life trying to decipher it and gain international interest in its study. The codex continued to hot potato through esteemed collectors’ hands after his death, until it was donated by a famous book dealer, Hans P. Kraus, to Yale University’s Beinecke Rare Book and Manuscript Library in 1969, where it has remained ever since.

Entire transcription alphabets have been created to try and understand these script and imagery, like that of the US Army’s William F. Friedman in the 1940s – he broke Japan’s CIPHER in WWII, but had less luck with the Voynich. The team of British cryptographers who took down the Nazis was also unsuccessful, which begs the question: which specialists could really understand this?

In 2017, medieval medical historian Nicholas Gibbs made an impressive case in the Times Literary Supplement about it being a gynocological text, written in abbreviated terms of medical Latin. Critics said he simply pulled two lines of text to translate to prove his theory – not nearly enough. “Frankly, I’m a little surprised the TLS published it,” said Medieval Alchemy of America’s director, Lisa Fagin Davis, “If [he] would’ve sent this to [Yale], they would have rebutted it in a heartbeat.” Ouch.

There’s another, simpler solution proposed by historians: maybe it’s all a joke. We know it’s not a 19th century hoax, but it could be the work of a 15th century charlatan. Another compelling theory imagines it as the product of inadvertent art therapy; drawings made by a man or woman living with a mental illness and sentenced to live a life with Jesuit priests. The world’s earliest Outsider Art, if you will.

In 2018, computer scientist Greg Kondrak entered the ring. He revealed to CNN that he ran the text through a computer program of hundreds of linguistic variations, and declared it a coded form of ancient Hebrew. According to Kondrak, the first line reads, “She made recommendations to the priest, man of the house and me and people.” The following pages, he says, were about pharmaceutical plant use. Most plausible, said academics, but all that computer magic still needs to be accompanied with manifold human interpretation and study.

Of course, the internet is buzzing with Average Joes & Janes trying to do just that. One amateur cryptographer on Reddit presents his translation of a text’s portion: Urinate out of your beautiful aqueduct and when raging, do it again. Selecting after this hot deceptive beauty and cut off the bush. Like a destructive fire, be afraid of this irate secret, where you live. Science do not treat with contempt… Calm down. Use restraint and strength as you are now an expert. Use force and toil to direct a beautiful lame person to avoid. Open field medical training use Caution of this fire stick. Sounds like a cross between, eherm, down-there-hair-care and UTI treatment. Gotta love their notes:

Shout-out to the theory that the whole thing is just an ancient lost Dungeons & Dragons manual:

As the world feels in many ways to be at a standstill in 2020, there is one new team of researchers whose theory is holding up pretty well to this tough sea of academics and specialist: a fabulous family research force from Turkey (one father, two sons) known as “Ata Team Alberta (ATA),” which claims it can understand about 300 words of the book. The father, Ahmet Ardiç, is an electrical engineer and avid studier of Turkish linguistics who has passed on his knowledge to his clever sons.

“The author of the manuscript was writing in phonemic orthography,” says one of the sons in a now viral video, expanding on their three years of study, “which essentially just means that he would spell things just as he would hear them.”

It appears as if there are six areas of focus: herbal, astronomical, biological, cosmological, pharmaceutical, and recipes. “The text is written from left to right,” he continues, “just as we would read it. It’s also quite poetic – there’s a rhythmic structure.” The lines on the page below, for example, look as if they were doodled around the mysterious plants when he says they’re actually matching in rhythm.

Like many who have come before them, ATA claims the text is a treasure trove of medical advice – but most interestingly, on how to perform things like the modern-equivalent of a C-section or abortion, which could explain why the medical volume was written in top-secret code. Some have suggested the manuscript could even be the work of a woman.

So what comes next? We wait for more research. We also enjoy the many artworks inspired by the Voynich, like this bite sized copy for Barbie:

Or these gorgeous sculptures by artist Lauren Eiferman on 1stdibs (but brace yourself: they’re about $4,000 a pop):

There’s actually a shocking amount of Voynich merch on the web. Want a Voynich dress? Find it here. More of a mug collector? Drink up. Seeking a new, esoteric tapestry? There’s a beautiful one on Society6.

There’s even a company creating exact replicas of the Voynich Manuscript itself.

So while the ATA team seeks verification from other scholars specialising in ancient Turkish philology, take moment to get lost in this boundless human treasure until the code is cracked. Although we have to say, there’s a small part of us that doesn’t want to know what it all means. As Henry David Thoreau said, people want to explore and learn all things, but we also “require that all things be mysterious and unexplorable…we need the tonic of the wilderness.”

Want to know more about the Voynich Manuscript? Here’s a PDF of the whole shebang. If you’re feeling fancy, a facsimile is available for purchase on Yale’s website. Happy armchair sleuthing! 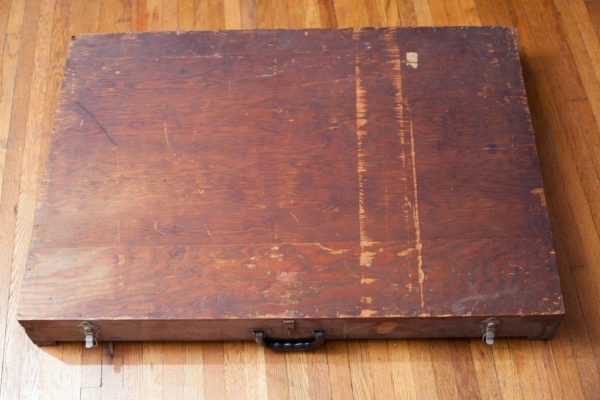 Found in the Trash: A Box of Otherworldly Notes 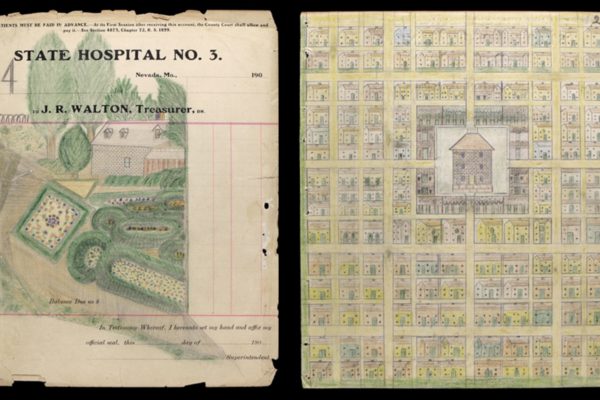 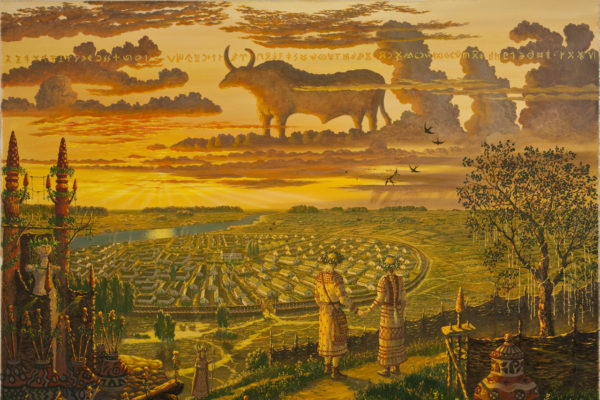 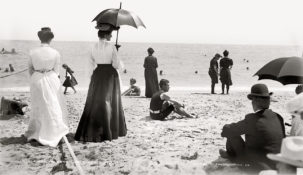